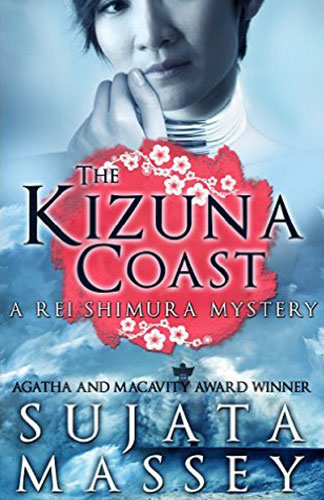 It starts with an SOS from Rei’s beloved elderly friend, the antiques dealer Mr. Ishida, who’s trapped among thousands on the ravaged Tohoku coast. Rei rushes from Hawaii to blacked-out Tokyo, where she discovers Ishida Antiques may have been burglarized and its cuddly watchdog, Hachiko, needs a caregiver.

Rei and Hachiko board a bus full of disaster volunteers headed to the damaged town of Sugihama. Once there, they learn about the disappearance during the tsunami of Mr. Ishida’s antiques apprentice, Mayumi, a troubled young woman from a famous lacquer-making family.

Making use of her volunteer friends, as well as her knowledge of Japanese manners and antiques, Rei investigates Mayumi’s suspicious disappearance. Complicating the situation is a police force overwhelmed by counting the dead, and a stalker who’s set his or her own sights on Rei.

Between 1997 and 2008 Sujata Massey produced ten novels in her popular Rei Shimura mystery series featuring a contemporary Japanese-American protagonist. Massey’s research and writing interests then shifted to British colonial India. It took the catastrophe of 2011 – a magnitude 9 earthquake off the east coast of Honshu followed by a tsunami and the meltdown of reactors in the Fukushima Daiichi nuclear power plant – to provoke Massey into writing about Japan again. She elected to write another Rei Shimura mystery, this time setting the action around a cluster of small, devastated communities on the Tohoku coast. With many Japanese citizens seen to be unselfishly attending to kizuna (bonds of loving kindness) during the crisis and its aftermath, Massey titled her novel The Kizuna Coast. Massey did not travel to the devastation zone. As she indicates in her Acknowledgements she relied on reportage and communications with Japanese clean-up volunteers for information.

Since I haven’t read any of Massey’s previous fictions, this review treats The Kizuna Coast as a stand-alone. Overall,I found it an easily readable mystery novel with mostly likeable characters and a convincing level of local colour and detail. Both the main plot and secondary incidents depend too much on co-incidence and implausibly lucky finds. Nonetheless it’s an engaging enough plot-line. First we’re seeking sidelined and missing persons. One, the elderly antiques dealer who is Shimura-san’s substitute grandfather, is located with impressive speed, thanks in part to the skills of his dog, a part-beagle. The second, the dealer’s young assistant, Mayumi, is found dead. A natural death by drowning: that is how the over-burdened officials are going to treat it. Rei Shimura, however, notices a king-sized clue that this wasn’t death by tsunami.

The plot then becomes an amateur search for three things: a killer, an explanation and a satchel of missing valuables (antique lacquerware items which the girl had taken from her family). It is suspected Mayumi intended selling the lacquerware to finance her art studies and new way of life in Tokyo. Rei Shimura’s urban investigations, assisted by her camp friends Richard and Enrique, take her to the fringe of Japan’s gay and lesbian demi monde. They also draw her attention to some nasty yakuza gangster dealings.

On grounds of ethics and good taste I found The Kizuna Coast troubling. Of course writers have often staged personal dramas and entertainments against backdrops of national suffering. But is it OK to have your protagonist gain access to a disaster zone and accommodation there by hooking up with a band of volunteers when her plan is to retrieve one particular old man and she will do very little of the hard slog of shovelling mud and clearing rubble? Is it OK to set a relatively trivial tale of misappropriated valuables in a place of misery and human loss, a place putrid with the odour of rotting fish and worse? Is it OK to give your readers a break from the tsunami zone by taking them on a voyeuristic Tokyo romp that requires Rei Shimura to cross-dress and overnight in a gay bath-house? Massey’s text both nods to these difficulties and tries to smother them under the weight of Shimura-san’s good deeds. I guess Massey’s justification would be that it’s a case of the end justifying the means: readers enjoy the commercially-pitched storyline, along the way learning more about a disaster they might otherwise have forgotten by now and perhaps being prompted to practise a bit of kizuna in their own communities.