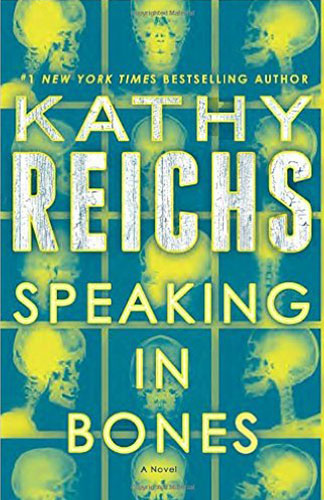 But as the words of a terrified young woman echo round her office from an audio recorder found near where the bones were discovered, something about the story won’t let Tempe go.

As Tempe investigates further she finds herself involved in a case more complicated and horrifying than she could ever have imagined. – See more at: http://www.randomhouse.com.au/books/kathy-reichs/speaking-in-bones-9780434021208.aspx#sthash.7TxYDoQx.dpuf

Kathy Reichs is a story-teller adept at using every genre trick in the book, including corny cliff-hangers at the ends of chapters, to keep her readers hooked. Despite my rational objections to some of the attitudes and ploys on display, I happily turned the pages of this 18th novel in Reichs’ Temperance Brennan series and I wouldn’t hesitate to recommend it to anyone who enjoys forensic investigation story-lines.

This time around, Reichs sticks with a single evolving investigation, rather than setting up parallel enquiries that may or may not prove to be related. She also sticks with a single regional location: the Blue Ridge mountain country of western North Carolina, where there survive isolated, God-fearing communities with low standards of education and medical care. With two young people having left behind oppressive family and church conditions in one of these communities, and unidentified body parts turning up below lookouts in the mountains, Tempe has a challenge laid out for her. Resentful that her efforts are being spurred by an amateur investigator, Hazel ‘Lucky’ Strike, Tempe is keen to denigrate the web-sleuth, a 60-plus widow with dyed carrot-coloured hair (say no more). When Hazel tries to reach her several times one Saturday, leaving urgent messages, Tempe is not prepared to return the calls. She’s too busy and preoccupied that day: first climbing down into a gorge in the company of a cadaver dog and a quietly affable local policeman, Zeb Ramsey, then dodging a deliberately dislodged boulder, and finally sitting around up at the top brooding about her personal affairs while site technicians work. Bad luck for Hazel.

Tempe’s usual detective colleague, Skinny Slidell, is also relegated to the edge of the investigation, taking responsibility for unpromising interrogations, dull cross-checking and CCTV footage viewing. Occasionally he pops in for an update discussion, with Tempe barely concealing her patronising opinion of him: “[Slidell is] a magnum-force legend in his own narrow mind … Slidell’s got the personality of an anal polyp … I wondered what high culture adorned Slidell’s walls. … I was surprised Slidell knew the genre. … Misconstrue. High oratory for Skinny”. At least Slidell is allowed to voice some of his cheerily profane sayings: “He’s a dick and a half, but he ain’t the doer. … Eager as a beagle on bacon … she’s goofy as a guppy … Why is it those geeks always sound like they just swallowed a gerbil? … Well oh my God in a tutu. … I can’t get my head around the arse end of this shrinky gobbledygook. … Jesus bouncing Christ. … [He] ain’t the brightest stripe on the flag”.

Side steps into personal relationships feed the investigation. Tempe’s mother, currently installed in a luxe retirement facility, is an insomniac so devoted to the web that she’s soon calling at two in the morning with Google Earth co-ordinates. And Tempe’s lover, Ryan, gets short shrift when he wants to press his marriage proposal by phone, our scientist preferring to talk for half an hour at a stretch about all the leads she’s following. Ryan abandons entreaties in favour of analysis: “You have no known victim, no primary scene, no weapon, no motive, no witnesses, no legit suspect.”

Eventually Tempe – or is it Reichs? – concedes that not a lot has been happening on the solution front. “Seemed all I’d done for days was talk on the phone. … I needed action. Involvement.” Within hours all conversations are left behind as Tempe sets out to do what we’ve been expecting all along: in Slidell’s terms she’s “going all cowboy”. Impatient, frustrated and sleep-deprived, she heads off alone, with feeble mobile phone reception and equipped only with her luminol spray, determined to break into the remote building she has convinced herself is a crime scene and willing to risk encountering the local man whom Zeb describes as “several exits past weird”. Cue violent climax. Will it be Ryan, Slidell or nice rural deputy Zeb who rescues this woman who likes to declare she will not play damsel in distress to any Galahad?