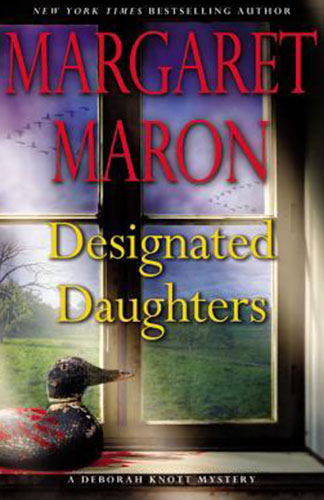 When Judge Deborah Knott is summoned to her ailing Aunt Rachel’s bedside, she assumes the worst. Thankfully when she arrives at the hospice center she learns that Rachel hasn’t passed; in fact, the dying woman is awake. Surrounded by her children, her extended family, and what seems like half of Colleton County, a semi-conscious Rachel breaks weeks of pained silence with snippets of stories as randomly pieced together as a well-worn patchwork quilt. But the Knott family’s joy quickly gives way to shock: less than an hour later, Aunt Rachel is found dead in her bed, smothered with a pillow.

Who would kill a woman on her deathbed? Was it an act of mercy, or murder? As Deborah and her husband, Sheriff’s Deputy Dwight Bryant, investigate they cross paths with an unlikely set of suspects: Rachel’s longtime minister; her neighbor, the respected local doctor; the friendly single father who often sought her advice; and perhaps the most puzzling party of all, the Designated Daughters, a support group for caregivers that Rachel’s own daughter belongs to.

Soon Deborah and Dwight realize that the key to solving this case is hidden in Rachel’s mysterious final words. Her mixed-up memories harbored a dark secret-a secret that someone close to them is determined to bury forever.

If you fancy keeping up with the doings of a large extended family in a regional community while sorting local mysteries with a minimum of blood loss, Margaret Maron’s cozy Deborah Knott series is for you. (If you don’t, well, Knott is not for you.) A Publishers Weekly reviewer wrote of Christmas Mourning, the 16th novel in the series: “As usual, interludes with relatives overshadow the investigating, but of course the warm and authentic family relationships are at the heart of this evergreen series.” The same could be said of Designated Daughters, number 19, except that this time around a family member’s death is under investigation and it is relatives and close family connections who are the suspects.

Elderly Aunt Rachel is lying in a hospice in North Carolina, silent and unresponsive, when suddenly she begins speaking as if she’s back in the days of her adolescence and early marriage. All afternoon she goes on “talking a blue streak”, reliving in disconnected fashion an array of long-past events and rumours, while her gathered relatives and connections listen, only the older ones recognising many of the names and happenings. When Aunt Rachel’s voice gives out, the visitors head downstairs for a makeshift buffet provided by her prayer group, leaving the old lady in the care of the trusted aide hired by the family to supplement the hospice nursing regime. When the aide takes a break to fetch a slice of pecan pie, someone slips into Aunt Rachel’s room and stifles her with a pillow. The culprit must have been somebody upset by what the old lady’s ramblings had revealed and apprehensive she might tell even more. It’s a neat set-up – Maron is an intelligent and subtle author notwithstanding the down-market material she parlays in this series – and one which reminded me of a witticism by Samuel Taylor Coleridge: “Swans sing before they die. ‘T were no bad thing should certain persons die before they sing.”

Official investigations are the province of Sheriff’s Deputy Dwight Bryant, with some chapters told from his point of view. However the leads and insider information come from his wife, Deborah Knott, who’s a niece of Aunt Rachel and tells most of the story in the first person. Deborah’s role as a local court judge (hearing equivalents of the matters dealt with by magistrates in the Australian legal system) allows Maron to drop in abbreviated accounts of various cases of elder abuse, family disputes over inheritances, and financial chicanery to defraud seniors. Aunt Rachel’s daughter’s membership of the Designated Daughters support group for unwaged carers introduces still more anecdotal evidence of contemporary aged care concerns.

One promising line of inquiry centres on a long-ago drowning down at Possum Creek. The way in which Aunt Rachel kept on referring to it suggests it wasn’t an accident. Dwight and Deborah try to elicit the memories of an old man suffering from dementia. He was there, but can he be relied upon to tell what actually occurred? The truth is winkled out and one mystery is solved, with Dwight and Deborah no closer to identifying Aunt Rachel’s killer. A second line of inquiry concerns a fatal house fire. Still another features a wife-beating clergyman. There is even an excursion to investigate old carved wooden decoy ducks. I suspect sly authorial humour behind that inclusion, since surely Maron must have guessed that her readers were likely to become a little miffed by all the red herrings. That’s if said readers were not already tied in knots of confusion by all the Knott family names and relationships. I cannot recall reading any book before this one in which the protagonist is one of twelve siblings and there are a number of sets of twins in the extended family.

Anyhow, one by one the inter-connected mysteries are cleared up, with the identity of Aunt Rachel’s killer and the muddled impulses that motivated the killing finally revealed right at the end. Pleasant and humane as most of the Knott clan and their associates turned out to be, I needed a rest from all of them by page 308, and I will not be hurrying back to Maron’s territory.