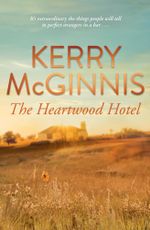 In the abandoned railhead town of Tewinga, now almost a ghost town, Lyn and Adam Portman struggle to keep the Heartwood Hotel afloat. Lyn loves her husband and longs to be a mother. But she’s kept busy caring for her elderly father, her community, and Max, the young worker who reminds her of the brother she’s lost and dearly misses.

When he fails to return from a day trip, Lyn’s concern deepens as the length of his absence grows, the more so with rumours of criminal activity at a nearby station. Meanwhile, a chance meeting uncovers a family bombshell that leaves Lyn reeling. The community must pull together as never before, proving that sometimes the smallest towns have the biggest hearts – and hide the darkest secrets.

From the bestselling author of Secrets of the Springs, this is the new outback mystery from Australia’s authentic rural writer and beloved voice of the bush.

First, an admission: I am a fan of McGinnis and have read all but one of her novels to date, plus her two volumes of memoir. In this, her latest, McGinnis once again produces a page-turning tale from an almost alchemical mix of the relationships within an Australian outback family, its friends and neighbours, all set against a background of geographical isolation and the inevitable difficulties of communication. The criminal element, which is believable, and very threatening, does not take shape until partway through the novel.

The work does not suffer for that because, by then, I was unable to put the book down as a young man, Max, becomes overdue from what should have been a day trip into the nearest town. The resident police officer brushes the matter off but Lyn, the wife of Max’s employer at the Heartwood Hotel, the hub of a small and diminishing town, knows that in the bush this kind of delay spells danger. The tension produced by this simple incident becomes palpable and, indeed, proves to be the forerunner of later horrors.

In between, we see the importance of local events to isolated people and the cash-strapped local economy. A travelling rodeo and a Country Women’s Association meeting both bring people together who might otherwise not have a chance to meet and catch up with the local news. Hard-working and hard-pressed wives and mothers find time to clean and decorate sheds for dances, organise numbers, the tables, and invitations, turn out a few sponges, angel cakes, lamingtons, as well as plates of sandwiches and salads during the day, and then clean up later. Recently, a headline read, ‘Strong women make into crime’. Strong women have always been a part of the world McGinnis has known from childhood, albeit without sticks, caps, and badges. They deal with everyday mishaps and even deliberate attacks on their lives and livelihoods with the same understated courage and capability they demonstrate in their homes and, sometimes troubled, families.

If I have any complaint with this latest novel it is that it relies on a pivotal coincidence – that of a briefly-encountered outsider recognising the name of a hired worker as being that of a very nasty criminal (but what’s one coincidence?), and a touch of melodrama almost too far when just before the end Lyn’s family leaps from being one of two generations to being one of four, with a lot of stuff to be worked through as a result. By then, though, the characters are so well established I felt that they would deal with it all in their own common-sensical and fair way. As always with McGinnis, the descriptions of land and people can be breath taking and poignant, the dialogue is so authentic it carries with it the scent of dust and eucalyptus, and the novel as a whole brings her typically unsensationalist insight into a life city-dwellers would rarely, if ever, see.