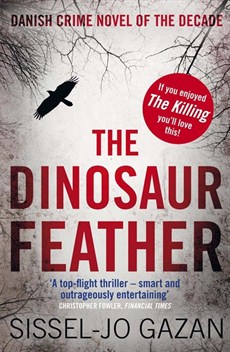 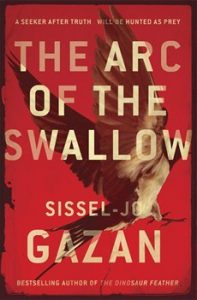 The Arc of the Swallow

The Dinosaur Feather, Sissel-Jo Gazan’s breakthrough crime fiction novel, was first published in Denmark in 2008 as Dinosaurens fjer. It was very well received in the Nordic region, being hailed as Danish Crime Novel of the Decade 2001-2010, and it sold for translation into 16 countries. Here in Australia we have the English translation by Charlotte Barslund.

Barslund also translated Gazan’s follow-up crime novel, The Arc of the Swallow, which was first published in 2013 in Denmark under the title Svalens Graf (The Grave Graph).

Both novels could be labelled scientific thrillers because their storylines focus on wrong-doing and mysteries in and around scientific research facilities. As a biology graduate of the University of Copenhagen, Gazan is equipped to write about this world convincingly. As a creative writer Gazan leaves herself free to be inventive but stays within the bounds of probability rather than going into fantasy, SF or “weird science”.

More strength to Gazan’s arm. There is a tradition of literary-minded crime fictions set in the humanities departments of universities, and many violent crime fictions take us into hospital emergency wards and morgues, but too few authors explore recognisable scientific environments. There must be promising story ideas and characters in science facilities devoted to pure or applied research or both. We need to see more technology and industry environments too, along with the big-money business corporations exploiting scientists’ developmental work. And if a woman author brings a somewhat different set of emphases to this subject area than male authors have to date, then all the better for diversity.

In both of Gazan’s scientific thrillers the dead body found early in the narrative is that of a man, a senior scientific researcher. And in each case a less senior woman scientific worker-researcher – Anna Bella Nor in the first novel, Marie Skov in the second — plays a vital role in pushing inquiries forward. Official investigation responsibilities fall to Søren Marhauge, a young Superintendent (and then Deputy Chief Superintendent) in Copenhagen’s Police Department. In the first novel, activity remains in Denmark. In the second, it extends to West Africa, where vaccination programs linked to Danish immunology research are underway.

Each novel has a large cast of varied and credible characters, and some of these characters come with backstories and complex ongoing lives. There are gruesome details and specialised aspects but also plenty of everyday domestic and office doings.

There is also romance intertwined with the complexities of gender politics and childrearing. In the first novel, Anna Bella dismisses Søren as “the world’s most irritating detective”. By the second novel, they’re living together and raising her five-year-old daughter. Anna Bella can be pretty irritating, so they are well matched.

All of this makes for an engrossing reading experience, and a long one: each novel runs to more than 500 pages in the small paperback format.

For me, The Dinosaur Feather was a welcome companion back in 2013 when I was recuperating from an illness. I’d discovered the book thanks to the publisher sending a copy of an early edition to Sisters in Crime, and I took it along with me when I travelled interstate. After an infection brought my travels to a halt, I had to spend a week resting at a friend’s house on Jervis Bay. A leisurely read in a beautiful environment: there are worse ways to pass the time, and I’ve had a fondness for Gazan and her writing ever since.