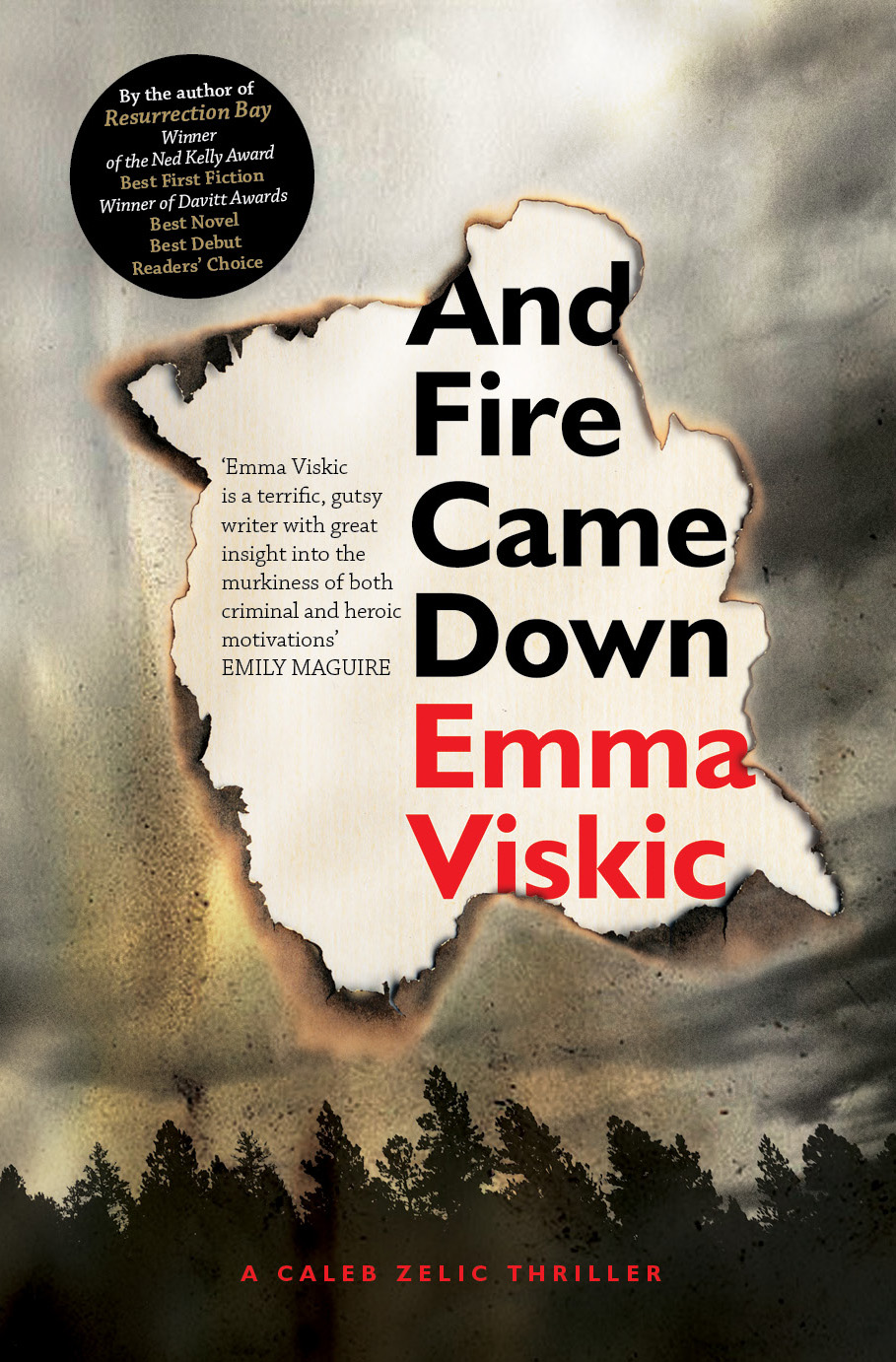 Deaf since early childhood, Caleb Zelic used to meet life head-on. Now he’s struggling just to get through the day. His best mate is dead, his ex-wife, Kat, is avoiding him, and nightmares haunt his waking hours.

But when a young woman is killed after pleading for his help in sign language, Caleb is determined to find out who she was. And the trail leads straight to his hometown, Resurrection Bay.  The town is on bushfire alert and simmering with racial tensions. As he delves deeper, Caleb uncovers secrets that could threaten his life and any chance of reuniting with Kat. Driven by his demons, he pushes on. But who is he willing to sacrifice along the way?

And Fire Came Down is a very successful follow up to Emma Viskic’s first novel, Resurrection Bay. Caleb Zelic, a deaf investigator, is back, struggling to sort out his own life and yet stubbornly determined to get to the truth no matter what.

Most of the action takes place in Caleb’s home town, Resurrection Bay, but the incident that drives the novel occurs in Melbourne when Caleb is out on his evening jog. A rather Dickensian character intercepts him and leads him to a terrified young woman. It seems like a classic trap, as Caleb follows the twitching and sniffing man up a dark alley, but the person who is in danger is the woman, and before Caleb can find out why she is looking for him, she is pursued and killed. Caleb realises the link with the woman must be Resurrection Bay and resolves to find out her identity and her reason for seeking him out.

Many of the characters from Resurrection Bay appear again: Tedesco, the sympathetic cop, Caleb’s ex-addict brother Ant, a desperate and still dangerous Frankie, and his estranged wife Kat, who has a more central role in this book. Caleb desperately wants to mend his broken marriage and find a place in Kat’s indigenous community, but events in the book make that seem more and more difficult and it’s not helped by his habit of fighting the very people who are trying to help him.

It doesn’t take us long to realise that his stubborn pursuit of the truth is as much to escape his own problems, including the trauma he suffered at the end of Resurrection Bay, as it is to solve a crime.

There are even times when Caleb seems to live in a world of his own creation, one in which he is constantly fighting against his deafness with an aggressive determination to be independent and strong, and in this book our understanding of that is enhanced as we learn about the stigma he fought against as a youngster.

Viskic has developed an effective style that drives the narrative. She has a gift for choosing pithy words to convey bigger ideas, like when she describes a woman as ‘wearing a cotton dress that looked as though it would smell of incense’  and she mixes abrupt phrases with conventional grammar to give the prose pace and immediacy. I’m not so sure about the technique she uses of giving supporting characters nicknames, such as Sniffy for the messenger, Red for Portia etc., which I find somewhat distracting, but this is a minor concern.

Where Viskic excels is in the way she gives us insight into Caleb’s constant search for meaning in his unhearing world. That search often leaves him with only hints about what people have said, and at times with a complete misunderstanding of the situation. It is a convincing portrayal of what it must be like to be deaf, and the continuous effort Caleb exerts to understand people is part of the tension created in the book.

The plot works well enough to drive the action, though perhaps it is not the main strength of the book. Caleb’s deteriorating state of mind is as much a part of the story as his line of enquiry that uncovers a set of circumstances where respected people do questionable things for good reasons, and which reveals only too believable social and political issues.

Caleb’s determination to follow every lead, no matter how slight, more often than not ends in him and those around him getting yet more battered and bruised. The way he disregards his own safety and at times other people’s, makes him almost an anti-hero, and the fact that one feels like telling him to stop and pull himself together, is a big part of the success of the novel, which I highly recommend.