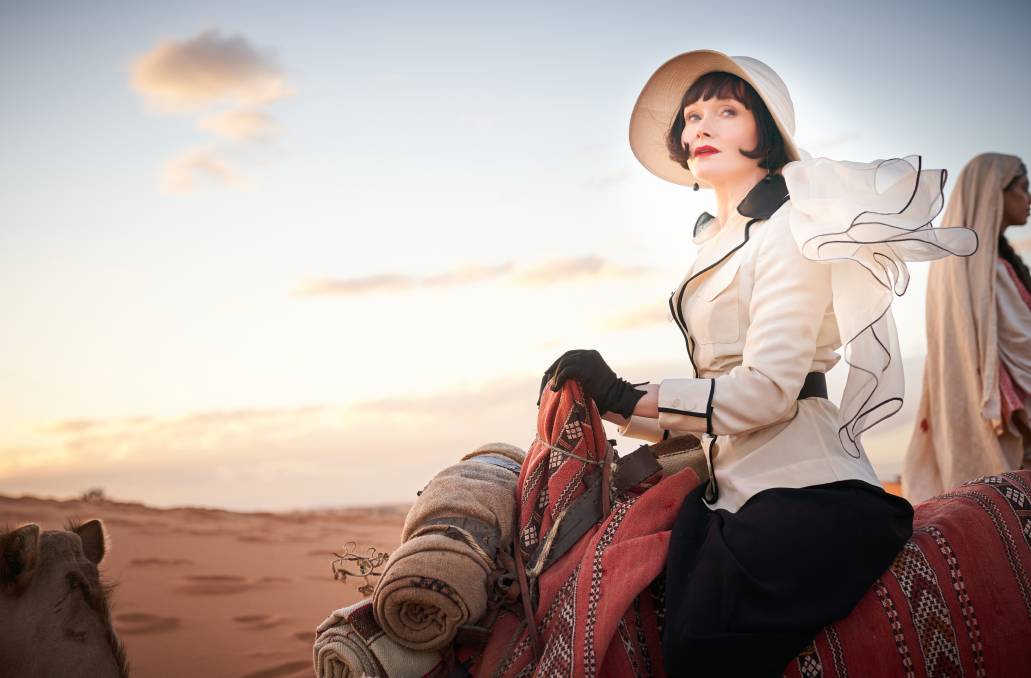 Sue Turnbull, Sisters in Crime’s Ambassador, introduced the recent screening of Miss Fisher & the Crypt of Tears. Here, wearing her professorial hat, she writes about Phryne fandom for The Conversation.

A heavily disguised Phryne (Essie Davis) is racing through the streets of Palestine, pursued by armed men. Excitement mounts. Having athletically eluded all attempts to capture her, Phryne sheds her indigo robes to emerge in a sparkling gold dress framed against the skyline like the superhero she has indubitably become.

Attending a screening of Miss Fisher and the Crypt of Tears at Melbourne’s Sun Theatre surrounded by fans – some who have flown across the world to be here – is an experience to remember.

Miss Phryne Fisher, “that unpredictable whirlwind of a woman” as she is described in the film, has become a global fan phenomenon.

In 1989, Kerry Greenwood introduced readers to her fabulous flapper detective in Cocaine Blues, the first of 20 books about Phryne Fisher set in Melbourne in 1928.

For producers Fiona Eagger and Deb Cox, Phryne was the perfect lead for a television crime drama, bucking the gritty Nordic noir trend with a heroine who was fun, fashionable and a feminist.

Miss Fisher’s Murder Mysteries premiered on the ABC in 2012. It has now been sold into more than 179 countries. The series screened on Netflix and Acorn TV globally, Channel 5 in the UK, and on the French public broadcaster France 3.

Globally, the series has made over $A14 million. This makes Miss Fisher the most successful export for Australian TV dramas over the past five years.

In 2019, the spin-off Ms Fisher’s Modern Murder Mysteries aired on Seven. In another first for an Australian series, the Miss Fisher format has been sold to China where a Mandarin-language version, Miss S, is in production.

Now, Phryne is the big-screen action heroine for those who are ready for a feminist re-imagining of Errol Flynn at his swashbuckling, rooftop-leaping best, or the adventurous Indiana Jones on the track of an ancient relic – but with a much better wardrobe.

Watching the film with fans, it’s the ballroom scene that galvanises the attention. As the camera tracks around the space, I realise many of the on-screen guests are sitting around me. These are the fans who not only contributed to the successful crowd-funding campaign that raised A$733,210 from 7,763 fans and helped get the film made, but who also signed up to be extras.

Miss Fisher and the Crypt of Tears was always going to be a film for the fans.

As an academic with a long-standing interest in ethnographic audience research, I’m particularly interested in the stories the Miss Fisher fans tell me about their first encounter with the show, how they found like-minded others online, and how these encounters gradually gathered momentum.

Over the course of a week that includes a premiere in Sydney and two fan screenings, I encounter fans from the US, Canada, the UK, Finland and Germany.

Two young women from Europe have spent ten days travelling to every Miss Fisher location they could find, from a steam train in Castlemaine to an obscure alleyway in the Kensington wool sheds, recreating significant moments from the series. They are medical students who bonded over Miss Fisher and are now enjoying the holiday of a lifetime, which has taken them off the usual tourist route and into the secret heart of Melbourne.

Many of the American fans at the screenings are members of The Adventuresses’ Club of the Americas, a society that will be hosting its fourth Miss Fisher fan convention later this year. At these conventions, fans share their scholarship and knowledge not only of the show but also of the fashions, poisons and Phryne’s Hispano-Suiza automobile.

Many of the fans are willing to share intimate and confessional stories of how they came to Miss Fisher, and how she and her world view were of personal value in difficult or trying times.

One woman describes how, working in a male-dominated profession, Miss Fisher has inspired her to be a bit more powerful, more confident and a lot less scared of the world.

The rhetoric is all about empowerment, but also the need to be unapologetically oneself, demonstrating the inestimable value of a fictional character who has found her way onto a global stage and into the hearts and minds of her devoted fans.

(Also, see the blog by Kirsten Comandich from The Adventuresses Club of the Americas: