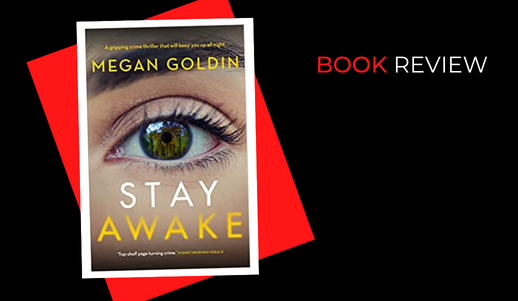 First published in the Weekend Australian on 10 September 2022 and reproduced with permission.

Stay Awake is our fourth standalone novel from Megan Goldin, an Australian author who excels at intelligently reworking crime fiction forms. The Escape Room (2018) was Goldin’s update of the locked room mystery, The Night Swim (2020) her podcast-era version of the reporter turned small-community investigator. They were both good reads, but it is what Goldin did in her 2017 debut novel, The Girl in Keller’s Way, a domestic noir, that illuminates her new book.

In interviews marking the release of Keller’s Way, Goldin referred to her love for Gothic romances and Daphne Du Maurier’s 1938 classic of psychological menace, Rebecca, as well as her fascination with memory research. Her protagonist, the second wife of a psychology professor in an American college town, struggled to distinguish accurate memories from false and to keep her sanity despite inappropriate medication and gaslighting.

Now, in Stay Awake, Goldin has updated her own update, replacing provincial marriage with the lifestyles of youngish professionals and service-industry people in a big city and inviting us to empathise with the sufferer of a rare form of amnesia, repetitive dissociative fugue. Having discovered that each time she falls asleep she forgets what has happened in her life during the past two-and-a-quarter years, 32-year-old Liv Reese has set herself the Sisyphean task of perpetually keeping her eyelids open.

In a basement Manhattan apartment, Liv sees a message on a wall written by a finger dipped in black coffee. There are more messages in pen and marker. “Memories lie”, they warn, “Don’t trust anyone”, and – most ominously – “He’s coming for me”. The fridge is full of caffeinated drinks, the bins hold emptied packets of No-Doz. Liv’s hands and forearms carry messages in her own handwriting, with “STAY AWAKE” spelled out across her knuckles.

The only thing certain about Liv’s situation in this clever suspenser is that she is in a dangerous condition of loss and alienation, alone on the streets in November with only the clothes she is wearing and some cash, but no ID, phone, or journal. Lacking trust, she flees authority figures, alters her appearance, and is too paranoid to ask for help. Each time she involuntarily drops asleep – on a park bench, on public transport – she soon re-awakes, hazy about any incremental gains she has made.

In a period of increasing surveillance and scientific investigation, Wilkie Collins’s The Moonstone (1868) featured amnesia plus aberrant behaviour (gem theft) while opiate affected. It pointed a way forward from sensation novels to Holmesian detection and Freud’s early ideas about amnesia.

Books and films incorporating nightmares, panic attacks, and memory blanks attributable to PTSD (then called shellshock or war neurosis) appeared in various countries after the world wars. Sleepwalking, actual and metaphoric, was another common motif.

In the last two decades, we’ve seen a proliferation of movies, games, and texts involving time shifts, memory malfunctions, and identity theft. Why? One thought is that the literal losses of a protagonist may be read as metonyms of collective insecurities. Another, that such unsettling subject matter speaks to mental overload and calls for hyper-alertness in a 24/7 online culture.

Liv comes to police attention after detectives scrutinizing a murder scene in a sixth-floor apartment find the victim’s blood has been used for writing a message in back-to-front letters on the windowpane. “WAKE UP!”, the words shout. CCTV recordings show a woman approaching the crime scene apartment; Liv’s prints are identified on a discarded knife. That’s the kind of data that leads the senior NYPD detective on the case to insist it’s Liv as prime suspect, Liv on the lam.

But might this stripped-down woman be more sinned against than sinning? It’s probable some trauma she cannot remember brought on her amnesia, and British authorities familiar with Liv’s past rate her as more likely a victim than a perpetrator. Was Liv lured to that murder scene to be framed? Is the murderer out to eliminate Liv before she deliberately or unwittingly reveals their guilt?

In Stay Awake Goldin carries off the considerable achievement of constructing a complicated narrative structure with frequent time jumps without baffling her readers. The intensity of Liv’s feelings is conveyed in her nervy first-person narration, though some readers will wince at the mixed metaphors, cliches, and dodgy grammar.

For readers more inclined to side with Stay Awake’s investigators, I can tell you the NYPD chapters are written in the third person and move forward steadily, describing activities across almost 24 hours. While Liv is wired on caffeine, ambition-driven junior detective Darcy Halliday advocates vegetarian burgers and is training for an ultra-marathon fundraiser for wounded veterans.

Imagining yourself confronted by Darcy, you may find yourself backing away from your coffee cup with your hands raised. Alternatively, Goldin’s book could prompt you to do what troubled Liv does: head to a late-night haunt with an understanding bar attendant who’ll line you up a couple of espresso martinis.

Stay Awake is Megan Goldin’s fourth stand-alone book and my first book written by Megan. It certainly won’t be my last.

In this thriller, Liv Reese wakes up with a blooded knife in her pocket and words written on her hands. Not only does she have no clue as to what happened but, her most recent memories were from two years ago. Can she get her name cleared before she gets hunted down by the person framing her?

Megan has thoroughly researched amnesia and it shows throughout the book. Incorporating amnesia in a murder thriller book is an ingenious way to create a compelling story. It makes me want to read more books with amnesia as a concept.

Set in New York City where Liv knows a lot of people in both her past and present life simply adds a daunting problem as to who Liv can really trust. Who can you truly trust in the world when you have lost your memories?

On that note, I felt Liv to be a bit too trusting with some people and went to locations she knew nothing about. Although you understand why Liv needs to investigate, is sets your heart pounding because everyone is a suspect. What also makes Stay Awake more intense is that the police are hot on Liv’s tail, so she can’t even go to the police about her circumstances.

I had a hunch as to who was behind bringing down Liv but, I wasn’t sure on the why. The reveal doesn’t quite explain the why but as a reader your imagination can put things together. And I loved working it out.

I highly recommend reading this book if you want to quick paced book that keeps you awake right up through the night to finish it.