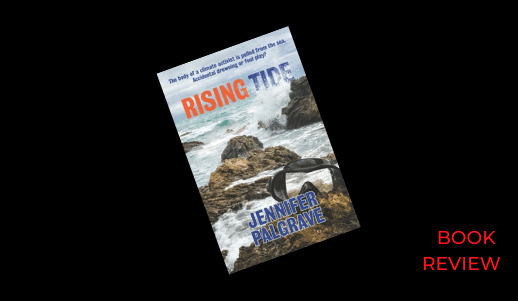 “I’m not Miss Marple, you know,” protests semi-retired book editor Lauren Fraser when a friend presses her to continue investigating a local death.

Technically, Lauren’s correct in asserting she’s not a puzzle-solver in a “cosy”. Rising Tide is city-based and issues-based: the city is New Zealand’s capital; the issue is climate change, with the focus on the science and practical implications of rising sea levels. Lauren’s previous adventure, The One That Got Away (2019), was also ambitious in subject matter. It concerned the attempted assassination of a NZ prime minister, decades of subsequent cover-up, and the beginning of Jacinda Ardern’s government.

However, Rising Tide does have enough attributes of the classic “cosy” for it to be a companionable, warm-hearted book. Along with its amateur sleuth it offers a limited suspect list and little in the way of on-page gore, violence, sex, or profanity. There is closure, too, with justice seen to be served locally even though the bigger problem of climate change remains. And while the action extends overseas (to Australia and Antarctica), into the CBD, and out of town, much of it happens within Wellington’s suburbs and among people who are Lauren’s friends and associates, giving the novel the feel of a mystery in a smallish, socially intimate space.

Jennifer Lapsley is the pen name of writing partners Lois Cox and Hilary Lapsley, both Wellington- based. Lapsley’s protagonist and her closest friends are lesbians. The significance of this to Rising Tide is the female solidarity it mobilises. These women support each other, with their interactions adding to the depth of characterisation and the progress of Lauren’s investigation.

Tropes familiar to readers of mainstream crime fiction are used unapologetically in Rising Tide. For instance, Lauren’s ageing neighbour is a retired police officer and Lauren walks her dog for her. So, in chapter one we have dog-walking Lauren viewing a yacht that’s been dashed against coastal rocks and learning from a bystander that a man is suspected of drowning. Then, after a body is recovered and identified, we have Lauren following up another dog walk with a neighbourly chat after lunch about pathologists’ reports and how police decide whether to open homicide inquiries.

Nat Spiller, the dead man, was an athletic climate activist whom Lauren had recently heard speaking in his challenging way at a public meeting. Understandably, he was somewhat disengaged from his property-developer father and brother. Ellie, Nat’s grieving partner, is the niece of one of Lauren’s friends, Pam, and it’s Pam who is pressing Lauren to look into the death, which Ellie insists cannot have been accidental.

Initially, Lauren resists: “Pam, I’m no expert on crime. Murder! It sounds extraordinary!”. In the absence of police activity Lauren is drawn into investigating, however, and despite voicing intermittent protests she does a capable job in a fashion that’s not all that far from Miss Marple’s. Cafés help fuel her determination. “Damn it, we’d better have some of that cherry tart to strengthen us.”

Nat Spiller, an admired climate change activist, has accidentally drowned. That’s the police verdict. But was it an accident? His partner Ellie thinks otherwise.

Pam, Ellie’s aunt, draws a reluctant Lauren Fraser into the mystery. The formidable Lloyd, Nat’s father, head of Spiller Developments, tells Lauren to butt out and it looks as if Nat’s brother Justin might follow through on Lloyd’s threats. But as Lauren investigates, suspects begin multiplying.  Was it Harold the bird-watcher, envious of Nat’s charisma? Or Derek, whose shonky Antarctic climate science Nat was about to expose? Perhaps it was Rodger, obsessed with Ellie and wanting her for himself?

Lauren enlists her circle of friends to help build the evidence for murder. The truth catches them all unawares.