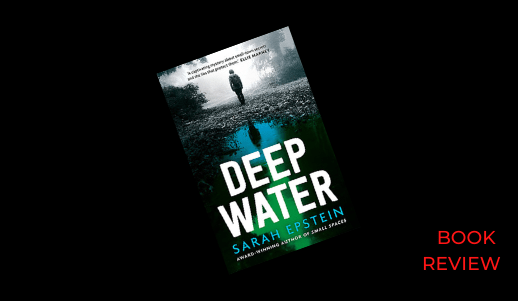 Deep Waters is a slow burn. Sarah Epstein takes her time to set scene before getting into the action. One of Epstein’s strengths is her ability to maintain and ratchet up the tension and to keep you reading. As the threads all come together, you will not put down this book until the final answer is revealed.

Sarah Epstein made her mark on the Australian Young Adult literature scene with her debut, Small Spaces, a genuinely creepy book that won the Davitt Award for Best Young Adult Crime in 2019. Her latest book, Deep Water, is a different sort of book but is just as tense as her debut.

Deep Water revolves around the disappearance of thirteen-year old Henry Weaving who hasn’t been seen since the night his small town was hit by a devastating storm that resulted in floods. His friend, Chloe, is keen to find out what happened to Henry and bring him home.

This is a small town mystery novel with a strong sense of place. Everyone is keeping a secret; some of them small while others are devastating.

The action shifts between the night of the storm, the time leading up to the storm and the present, and is told by Chloe, Henry and Henry’s older brother, Mason. Mason and Henry have a mother who is an alcoholic and is bitter and resentful with her lot. Theirs is not a happy household. Chloe’s parents have separated and she bides her time between Sydney where her mum is and The Shallows where her dad has a motel. Circling around the action are Chloe’s friends, Raf, Sabeen, Tom and Rina.

It is Chloe who drives the action. She is a ‘fixer’ and is determined to find Henry. Her relentless search will threaten other people’s secrets, including her own. The more she digs, the more people close to her become nervous.

HENRY WEAVER IS MISSING
Three months ago, thirteen-year-old Henry disappeared from The Shallows during a violent storm, leaving behind his muddy mountain bike at the train station.

MASON WEAVER IS TRAPPED
While Mason doesn’t know who he is or what he’s capable of, he knows the one thing binding him to this suffocating small town is his younger brother, Henry.

CHLOE BAXTER WANTS ANSWERS
Why would Henry run away without telling her? One of Chloe’s friends knows something and she’s determined to find out the truth.

As Chloe wades into dangerous waters and Mason’s past emerges, a chilling question ripples to the surface: how far would you go to keep a secret?