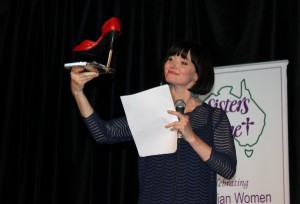 At last year’s Scarlet Stiletto Awards, Sisters in Crime members were all busy signing a petition to the ABC calling to commission for a 3rd series ofMiss Fisher’s Murder Mysteries in which the presenter, Essie Davis (pictured), starred. More signatures were collected via a e-petition.

We – and other fans – were successful –and the ABC is currently shooting 8 new episodes of Series 3. The even better news is that the ABC TV Director said on 12 November:

“Miss Fisher’s Murder Mysteries is now an integral part of future ABC programming. Miss Fisher is now an international phenomenon. We have just sold the rights to the Miss Fisher scripts to China and it is being remade in Chinese… [W]e are very pleased to have it back on air… there is no reason why it couldn’t continue for many years to come.”