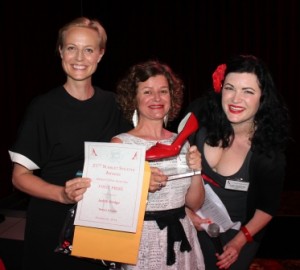 Bridge told the 140 strong crowd at a gala dinner at Melbourne’s Thornbury Theatre on Friday night (21 November) that she was a rampant genre-swapper who has had mixed success in her various artistic endeavours.

“Having been long-listed, short-listed, and short, short-listed so many times, it’s refreshing not to be the bridesmaid again. ‘Amy’s Sandal’ is one of the few crime stories I’ve written. I usually write fantasy or ‘pretty’ stories for women’s magazines,” she said.

“Now that I’ve won the Scarlet Stiletto Award, I might have to start honing my murderous impulses.”

Now working as a library technician at Curtin University, her short stories and microfiction have been published in Dotdotdash,Indigo, That’s Life, The Big Issue,Spineless Wondersanthologies, the Sand Journal (Berlin), the Fish Anthology (Ireland) and online. (See www.judebridge.com) 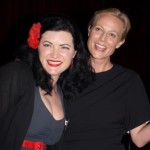 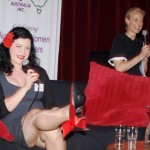 Marta Dusseldorp, star of ABC1’s Janet King, presented the awards. Prior to the award presentations, Dusseldorp discussed her ‘life in crime’ (and much more) with crime author Leigh Redhead.

This year a record 207 stories competed for the Scarlet Stiletto Awards for a record $8800 in prize money plus the coveted trophy for the overall winner. Twenty-three authors and 27 stories from across Australia were shortlisted for a total of 15 awards. A record 20 shortlisted authors attended the award ceremony.

Julianne Negri (Brunswick, Vic),variously a musician and eco craft warrior, took out the Pantera Press Second Prize ($1000) for “#hitandrun”, a story about revenge and social media.

The Sun Bookshop 3rd Prize ($500)went to Fin J Ross (Eagle Point, Vic), a journalist, author and creative writing tutor who runs a boarding cattery, for “What’s a Girl to Do”, story of revenge and the Coburg mafia. Another story by Ross, “The VOTOS Solution”, about a social work program to re-educate the town’s errant husbands, was runner-up in the Athenaeum Library’s Body in the Library Prize ($500).

The Athenaeum Library’s first prize ($1000) was awarded to Natalie Conyer (Mosman, NSW), who abandoned a sensible corporate career to pursue a PhD in South African crime fiction at the University of Western Sydney. Her story, “The Book Club”, features a dismembered body in a suburban library and an inventive use of the Dewey Decimal classification system.

The Kerry Greenwood Malice Domestic Award ($750) was won by Frances Sutherland (Surrey Hills, Vic) for “Deathon a Triple Score”, a murderous tale about Scrabble. Sutherland describes herself as ancient, feminist, tree-hugging, animal-friendly, opp-shopping, cinema-addicted pagan” who has retired from the community sector.

Eleven-year old Bridey Carmel (Bittern, Vic) won the Allen & Unwin Young Writer’s Award ($500), open to writers 18 or under,for “Dorothy Gale P.I.”, a sleuth who bears a certain resemblance to another fictional Dorothy. Carmel starts high school next year and dreams of being a film director. Carmel’s mother, Kylie Fox (Bittern, Vic), was highly recommended for “Blue Eyes, Yellow Roses”. Fox is a writer, student, editor and mother of five. She has been placed third and been awarded a category prize in previous Scarlet Stiletto Awards.

A brand-new award sponsored by Arena Magazine for the Best Story with a Political Edge ($500) went to Melanie Myers (Ilkey,Qld) a university lecturer who is alsothe Artistic Director of Reality Bites Festival, a nonfiction writers’ festival based on the Sunshine Coast, Her story,“Savage Women”, a dystopian story about abortion set in 2044, will be published n the December edition of Arena. The runner-up story in this category, “The Elephant Thief”, by crime novellist, Angela Savage (Brunswick, Vic) will also appear in the same issue.

The Catherine Leppert Award for Best Environmental Theme ($500) was won by retired zoologist Suzanne Frankham (Brighton, Vic) for “The Island”, a story of scientific exploration where tides take their revenge.

Lindy Cameron presented her Clan Destine Press Award for Cross Genre ($400) to speechwriter and training consultantRichenda Rudman (Flemington, Vic) for “The Sixth Sense”, a futuristic story about ichips implanted in the brain. “The Recollection” by Rudman was also highly recommended.

Another brand-new prize, the Liz Navratil Award for Best Story with a Disabled Protagonist, was jointly awarded to Vicky Daddo (Hazelwood South) for “Prussian Blue” and Anna Snoekstra (North Fitzroy, Vic) for “”Out Came the Sun”. Both will receive the full award of $250. The award was sponsored by the Queensland Chapter of Sisters in Crime in honour of the late Liz Navratil, a member with disabilities. 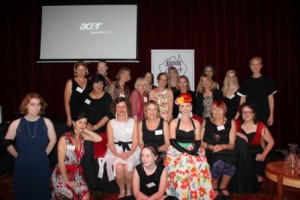 National Co-convenor and event organiser, Michaela Lobb,said that Sisters in Crime had been overwhelmed – and delighted – by the sheer quantity and quality of the stories this year.

“The popular Malice Domestic and Body in the Library Awards drew 91 and 56 entries awards apiece. If there were as many bodies in libraries as imagined by Australian women, we’d never get any reading done!”

“The Scarlet Stilettos have spawned a vast criminal enterprise but Australian men should sleep more soundly as a result. Without this outlet for so much murderous intent, more would end up sleeping with the fishes or meeting some other dire fate,” Lobb said.

The judges decided not to award the Ann Byrne Best Financial Crime Award and the Josephine Pennicott Award for the Best Story by an Indigenous Writer.

An edited version of the script with author bios and story synopses is attached.