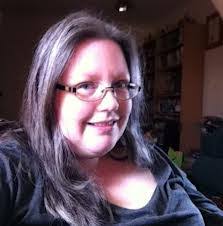 Hi Livia. So culinary crime is a thing. And it’s been around for a while. Can you give us some potted intel?

I think there’s something classic about the combination of food and crime! I grew up on Robert B. Parker’s private detective novels, and Spenser was always cooking while he worked over details of the case. I also have fond memories of Richard Griffiths in the TV show Pie in the Sky.

You’ve published three novels in your Café La Femme series, so I’m guessing you enjoy writing your version of culinary crime. Where’s the fun for you as a writer, and what feedback (sorry) do you get from readers?

I get so many tweets from people complaining about their food cravings after reading one of my books and blaming me for the cake they just had to eat or the ice cream they couldn’t resist… The best kind of reader complaints!

I adore writing about food, and about people who feed other people. You can express a lot about who people are through their relationship with food and cooking.

It works really well for Tasmania-set stories, too, because of our huge focus on café culture and culinary tourism. We have such gorgeous ingredients here, lovely fruits and vegetables, and decadent desserts. It would be a crime not to share them.

Is there an appeal for illustrators and designers too? Your novels have smart covers.

I’ve been so lucky with my covers! Our first designer, Amanda Rainey, did some fabulous work that I adored. And the new rebrand of the series, with covers by Cathy Larsen, works so well with the use of retro blackboard text and lovely original illustration.

I was a guest at the 2019 Tasmanian crime fiction festival, Terror Australis, and it was just after the new covers were revealed – I’ve never had so many people complimenting my books all at once!

The first book in your series, A Trifle Dead (2013), was shortlisted for Sisters in Crime Australia’s Davitt Awards in the Debut Book category. A bit about the story and its protagonist?

Tabitha is a twenty-something café proprietor in Hobart, a chaotic wild child who is just starting to get her life together. She doesn’t especially want to become a detective – she’s from a police family and has been avoiding that side of life for a long time – but her first mystery gets personal very fast, and her talent for figuring people out (to feed them cake and coffee) comes in very handy. There’s romance, epic friendship, amazing vintage fashions, and slightly pornographic meringue art.

Drowned Vanilla (2014) was the second in the series. What was Tabitha doing in that one?

Drowned Vanilla is about a missing persons case that turns deadly – Tabitha starts out trying to help a friend and it all escalates dramatically! The story is centred around a fictional Huon Valley town called Flynn, and includes an improvised film noir project, cam girls, and a ridiculous amount of ice cream. Just, so much ice cream. Also, kissing. 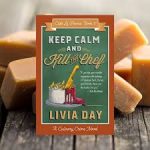 When Tabitha returns in book three, Keep Calm and Kill the Chef, she has entered her café in a competition. Let’s hear about the competition and its key personnel, and then about the three competing cafés and their personnel.

Café Wars! Tabitha joins a Youtube contest in which local coffee shops are pitted against each other in a series of entertaining challenges. Café Wars is famous because of its celebrity chef, Cameron Crewe, who is every horrible chef boss you’ve ever heard about – he’s rude, dismissive, sexist and all out toxic. But it’s all in good fun, right? RIGHT?

#Sconebros is a pop-up café run from a tent on a beach by a team of lads from New Zealand. They’re so cool Instagram probably hasn’t even heard of them yet. These bros match their scone flavours to their tea flavours and serve up an epic #sconut in a unique flavour every day. Remember the Cronut sensation, or Zumbo’s zonut? Imagine that, but with scones.

The Chocolate Teapot takes adorable and cozy to the ultimate extreme. Run by two elderly married ladies with a taste for vintage china and traditional desserts, it’s the perfect place for a classy cuppa. Tabitha, who is friends with everyone, has a grudge against them because they stole one of her best friends to work as a barista. But she also wants to be them when she grows up.

The home team! Our Tabitha is all about serving up great food in interesting ways… and she has a particular talent for deadly desserts. Her toffee cutlery is to die for…

We’d better not give away any more of the plot. Was there anything else you wanted to draw our attention to in Keep Calm?

Xanthippe! It’s been on the cards for some time, ever since the tall brunette rolled back into town. In Keep Calm, Xanthippe is officially working as a private detective, just in time to save Tabitha’s bacon. And in a bit of a change from the previous books, she shares the protagonist role with Tabitha, the story switching between their voices.

Livia Day is a pseudonym. Would you like to tell us about your writing under your ‘real’ name?

Livia is for my crime writing, but I also write science fiction and fantasy as Tansy Rayner Roberts. Lots of different kinds of SFF – from the dark, bloodthirsty and sinister epic fantasy The Creature Court, to the spaceships and swords of Musketeer Space, or the fun and adorable holiday romantic fantasy Merry Happy Valkyrie. This year’s new releases include Unreal Alchemy (witchy magic university share house stories) and Castle Charming, a contemporary take on royal romance and fairy tales. I publish a lot of my stories directly via Patreon and my Sheep Might Fly podcast.