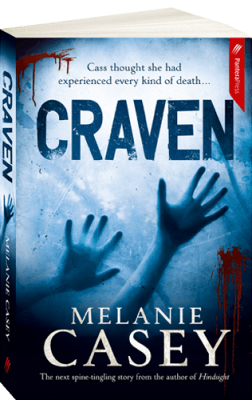 Moving to the city, Cass Lehman hoped to leave her recent notoriety behind her. Her ability to experience the final moments of a violent death helped the local police capture a serial killer, but also meant she was almost his final victim…

With a place of her own and a new job, things are looking up for Cass. But just as she starts to feel settled, Cass is targeted by a deranged stalker.

Are the personal attacks linked to a string of unsettling deaths that have left the police stumped?

Her ‘gift’ is called on yet again by the one man she vowed she would never contact. Cass and Detective Ed Dyson are thrown back into each other’s lives but can they overcome their feelings to put an end to the terror?

Will her experiences of death reveal the mind of the killer… or is there no such thing as a happy ending?

If you appreciate dark thriller episodes followed by sunlit relief, and you want a reasonably straight-forward read with feel-good closure, you’ll like Melanie Casey’s crime thriller Craven. As fast as Detective Ed Dyson or one of his colleagues is trying to employ Cass Lehman’s psychic gift in the cause of solving major crimes, Cass is trying to retreat to the safe familiarity of home. And with the sexual attraction between Cass and Ed kindling, the relationship between the two becomes as emotionally turbulent as Ed’s cases are gory.

It’s a neat set-up for a crime fiction series, combining the police procedural, the serial-killer sub-genre, recognisable Australian environments, dashes of lust and humour, and satisfying conclusions. So far Casey has given readers three instalments: Hindsight (2013), Craven (2014) and Missing (2016). Each novel can be read independently, as Casey includes explanations each time around, and it’s not imperative that you read the books in date-of-publication order. However, if you can begin at the beginning, with Hindsight, that’s all the better for following developments in the lives of the recurring characters.

Julius Caesar is reputed to have summarised a short and successful military campaign in three words: “Veni, Vidi, Vici.” “I came, I saw, I conquered.” The best-known updating of recent years is spoken by a character in the movie Ghostbusters: “We came. We saw. We kicked its ass.” In Craven, the division into Veni, Vidi and Vici sections indicates developments in several storylines. There are the spiteful attacks affecting Casey’s protagonist. There are the police investigations of a number of deaths in and around Adelaide, with Ed and his dapper partner Dave the lead detectives. And there is the personal relationship between Ed and Cass.

In Part 1, Veni, Cass ventures out of regional Jewel Bay to live in South Australia’s capital city. She finds a place in which to live independently (albeit a place with an elderly lady as her neighbour and a friendly cat as a frequent visitor). She starts work as a university tutor, she acquires a gal pal confidante, and she experiences the disturbing attention of an apparent stalker, perhaps one of her students.

Veni also shows Ed having his own arrival experiences. Although his secondment to a city position has preceded Cass’ arrival, he is still getting to know Adelaide. An early morning call-out sees Ed and his partner driving to the scene of a recent death. A man with past links to gangs and convictions for narcotics possession has fallen from a fourth-floor balcony. There is a commercial quantity of cannabis plants growing hydroponically in the man’s apartment, and a notebook in his pocket yields a list of names.

Since Ed treated her poorly a while back, Cass is determined not to revive their relationship and has not told Ed she has arrived in Adelaide. No prizes, reader, for foreseeing that the two are soon propelled together. Cass appeals for Ed’s help after the anonymous attack which leaves her car’s windscreen covered with animal blood and the word ‘FREAK’ written in the mire. Then, in Part 2, Vidi, Ed draws Cass into his current investigation when he takes her to a body recovery scene, where she inadvertently touches a corpse and has a horrifying vision of how that person died.

Fearfulness is the keynote of Casey’s parallel narratives in Craven.  Fear in a diversity of modes – from anxiety through to the phobic and cowardly – perturbs Casey’s characters. Worse, there are people in their world who perversely enjoy provoking terror. “How could someone enjoy another person’s fear?” asks Cass’ grandmother. With Cass and her mother having survived brutal treatment at the hands of sick/mad/bad men, they can be seen as the conquerors, and toward the end of Part 3, Vici, they briefly discuss possible explanations for why some people enjoy tormenting others. It’s an important question, and one the novelist puts on several occasions in the Cass Lehman series.

Craven closes on a soothing note, with Cass recovering back at Jewel Bay in the company of Gran, Mum, the family cat – and Ed. Home’s placid daily rhythms have “an almost sacred quality”.