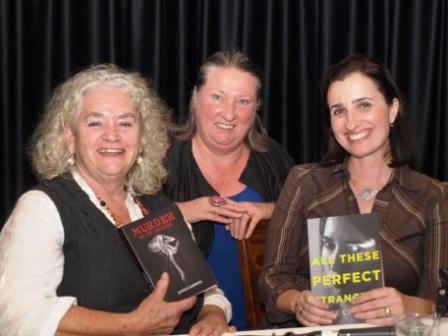 Newly-minted crime authors Janice Simpson and Aoife Clifford enthralled (and amused) a large audience talking about their books, Murder at Mt Martha (Hybrid press) and All These Perfect Strangers (Simon & Schuster) to Sisters in Crime in Melbourne on 29 April. Under the gentle interrogation of Sisters in Crime national convenor, Maggie Baron, they revealed the evolution of their novels.

Janice Simpson: Needing a subject to write about when I enrolled in Novel 1 as part of a Diploma in Professional Writing and Editing, I decided to pick up on a story that had flitted round the edges of my imagination for some years.

The murder of 14-year-old Shirley Collins on 12 September 1953 hit local and interstate headlines when her body was discovered, bashed and partially naked, in the driveway of a holiday home at Mt Martha. Despite interviewing more than 4000 people, the police remained baffled. Questions I had when I first read about this case in the early 2000s included how could this girl have travelled from her home in Reservoir to Mt Martha. The first part of her journey was by train, but even then witnesses were divided as to where she boarded on that Saturday evening. Some said she alighted from the bus she caught in the presence of her foster mother near her home at Reservoir Station, others said she got off the bus at Regent Station and caught a train to the city from there. What was clear was that she did not end up at Richmond Station where her work friend was waiting to pick her up and accompany her to a twenty-first birthday party in honour of one of their colleagues. The party was held at an address in Punt Road. In fact, according to two witnesses, she arrived at North Richmond Station and walked down the Elizabeth Street ramp to Punt Road. One of the witnesses saw her talking to a man in a car. What happened from thereon remains a mystery.

My novel makes sense of this brutal murder, even though in reality I am still puzzled as to what really happened. Writing it was both exhilarating and laborious, as I needed to check – and often re-check because initially my notes were not sufficiently organised – not only the ‘facts’ of the story, but everything else that was going on in Melbourne at the time. I could easily have been waylaid by the Petrov Affair, as it was called. Or by the Hungarian Olympic team’s defection in 1956. Both these stories also lend themselves to fictional treatment. Maybe in the future I shall write about them, but first I would need to do some very serious study about the USSR and its methods leading up to both these events.

As I said, I began writing Murder in Mt Martha in 2009 – and finished the first draft  – as part of the PWE course. In 2010 I enrolled in Novel 2 and needed a new subject. That year I wrote a police procedural A Body of Work, introducing two detectives, Angela Micelli and Brendan O’Leary. I am looking for a publisher for this novel, set in Melbourne and Ballarat, the first of a series. At present I am a third of the way through the second in the series, On the Ball, a story set at the Australian Open Tennis Grand Slam which roves from Glenlyon in country Victoria to Melbourne and as far away as Estonia. Why Estonia? Well, you’ll have to wait until it’s published, I’m afraid.

Catch more of Janice on this video: https://soundcloud.com/hybrid_publishers/interview-with-janice-simpson

Aoife Clifford: The first kernel of an idea for my book All These Perfect Strangers came to me while I was doing the washing up one day. I was thinking about the structure of crime novels and how a common structure was a protagonist goes off to a strange land and has to overcome threats and struggles before returning home. I wondered what would happen if you took that structure one step further and had everyone arriving at the strange land at once – when everyone is a ‘perfect stranger’. And then I thought first year university is a perfect setting for that.

There were several themes that I wanted to explore in my book, including the differences between guilt and responsibility. Studying law I often thought that what made someone guilty or not guilty could be quite arbitrary and that moral responsibility is a much broader concept. I was interested in exploring the tension between the two.

At the start of the novel, is the sentence “This is a story that could be told a hundred different ways” and I was interested in writing a book that wasn’t cut and dried but that gave the reader an open invitation to interpret who is really guilty and innocent.

My grandfather Sigerson Clifford was a well-known Irish writer who wrote poetry, short stories and plays. If you travel around the Ring of Kerry you can see a statute of him, a museum exhibition and a wall dedicated to him (the Irish really love their literature). It was only after I had published my book that I discovered he had written a crime book as well, The Tragic Story of the Colleen Bawn, which is a fictional retelling of the infamous murder of fifteen-year-old Ellen Hanley in 1819.

Recently, I have had a few short stories published (Review of Australian Fiction and Kill Your Darlings) and one will be published shortly in Ellery McQueen Mystery Magazine in the United States. That always makes me want to write some more but mostly I’m concentrating on novel number two which is a crime novel set in the present but focuses on a crime committed twenty years earlier.