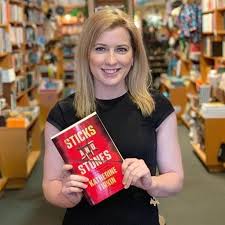 Hi Katherine. Congratulations on your debut novel, Sticks and Stones. First a few questions that may give guidance to would-be crime authors. Sticks and Stones has been published by Bantam, a subsidiary of Penguin Random House. That’s quite a coup. How did this come about?

Thank you! I made the decision early on that I didn’t want to send my manuscript out to publishers myself, with the hope of making it through their ‘slush piles,’ so my first step was in getting an agent. Again, I didn’t want to approach people via email only, so I looked for an opportunity to meet an agent in-person.

This came about through the Faber Writing Academy’s Ready to Submit program, at which I met Jacinta di Mase. I’d done a bit of research on Jacinta’s agency prior to our meeting, and I was lucky that after reading the first three chapters of my novel she requested the entire manuscript, and pretty soon after that she signed me up.

From there it was a process of letting her approach publishers, and I was lucky that Beverley Cousins from PRH took an immediate interest. She was the first publisher to phone me after my novel went out on submission, and we had such a good conversation that I immediately made up my mind that I wanted to work with her.

How much time passed between the day when you started planning your novel and the day earlier this year (2020) when it was released? And what were the most important stages from your point of view?

It was in about 2014 or 2015 that the idea for Sticks and Stones initially came to me. I was walking along a very deserted bike path, in a bit of a slump with life (I’d just lost my job and broken up with my partner and so on…). At that point I had a couple of ‘failed’ manuscripts stored away and I’d pretty much given up on the idea of writing a novel, so it was a surprise to feel invigorated by an idea again.

I rushed home and wrote the first scenes of the book, but after I’d got that out of my system I saved the document and didn’t think about it again for a couple of years. In fact, it was only as I was clearing out an old laptop that I rediscovered the document and decided to work it into a full novel.

In terms of important stages: the frustration of realising I’d written an awful first draft and having the resilience to go back and re-write was a turning point for me – at this stage I’d invested so much time I knew there was no going back!

You’re a widely experienced journalist currently working with CBS New York. What prompted you to take on novel-writing as well and how did you manage your workload?

I’m actually more surprised to find myself working as a journalist than I am to be writing books! As a child and teenager going through school, my sole focus was on being an author, and journalism just seemed like a logical side-job while I practised creative writing. It was an added bonus for me that I ended up falling in love with reporting and made a career out of it.

The workload is difficult – but I’m sure that’s the same for everyone. Like many jobs, being a journalist is not a routine 9-5 type job, and I often work weekends, early mornings and overnight shifts, so I’m not someone who can guarantee a set time to write each day.

For me, the key is in focused, quality time. I’ve definitely learned that I produce better work when I give myself a tight deadline and have to dedicate intense focus and time, rather than letting the whole process drag out for years like I did with the first book. 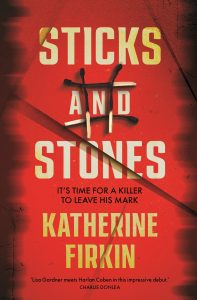 Some online reviewers remark that your narrative technique is similar to that of a TV series or movie in that you start with multiple points of views, requiring viewers to gradually learn who’s who and how they fit together, and there is lots of cutting between scenes. Did you intend to work in this way?

I didn’t have a plan on how I was going to write when I started out, so everything that happened with Sticks and Stones in terms of structure, perspective and pacing really just happened by gut instinct. It made sense to tell the story this way, but I don’t plan on writing every book in the same fashion.

Funnily enough, I never considered Sticks and Stones a police procedural when I was setting out, although it clearly is. For me it was always just the logical way to tell the story. Having said that, I certainly think my journalism career rubbed off on how I approached the book. I really did want it to be a realistic portrayal of how crime is investigated in Melbourne, and I relied heavily on the advice of several members of Victoria Police.

I wanted to focus on someone who works in the Missing Persons Unit because I think it’s a fascinating division, and one that perhaps requires a bit more of a ‘judgement call’ from officers on which cases are particularly worrying and which are not.

Your main character, Detective Senior Constable Emmett Corban, is a likeable, conscientious man who’s been with Missing Persons for a year. You’ve chosen not to create one of those cops with a fatal flaw, secrets or a traumatised past?

My lead detective is unusual in that sense, and I was worried that perhaps he wouldn’t be ‘interesting’ enough to capture the attention of readers, but surprisingly that seems to have been one of the things people like the most. Again, I didn’t specifically set out to defy the norm, but I was perhaps a little influenced by detectives I see out on the road when I’m working as a reporter.

As two missing persons cases escalate in seriousness, homicide police are brought in, forcing Emmett to work in a dual role, interacting with his MPU colleagues and Homicide. How did you go about differentiating all these police and keeping up with what they were doing?

I wrote this storyline based on feedback from detectives and police that I was consulting with – that quite often in Missing Persons cases, the main MPU detective will stay leading the case because they already have the relationships with family, friends, etc.

But you are correct in noting that it wasn’t an easy feat to move the investigation between two departments. Working out the structure and pacing of when I introduced new characters was difficult, and it required a lot of re-writing on my part. Initially, I definitely had too much going on and it was confusing for readers. I think that’s something you can only work out by doing and re-doing.

Emmett’s wife Cindy is on her own learning curve. What can you say about that and its relevance to the main storyline?

I loved the idea of having Emmett’s wife as more than just a ‘side character’, and I wanted her story to be just as important as his. Cindy is someone who is incredibly independent but has found herself falling in love with someone whose job tends to take priority. When we meet her, she’s at a stage where she’s trying to break out into a new career and it’s a constant battle to manage the demands of a new job, her young family, and her marriage.

Emmett and Cindy’s young child and some other children and youths matter to the plot. How was the experience of writing them?

Actually, I was surprised to discover that the children in Sticks and Stones were my favourite perspectives to write from. There’s something incredibly liberating about seeing the world through the eyes of a child or young person; how they process things and how they reason with what’s going on around them.

Outside of being a journalist I’ve spent over 10 years in a side-role working with young children through to teenagers, and I’m sure that’s helped me to better understand how they view things.

I liked Emmett and hope we’ll be seeing ‘Detective Emmett Corban #2’. What are the chances?

Emmett will be back in May 2021! I had always intended for this to be the start of a series, so I was very excited to have PRH sign on for the next instalment.

Is there anything more you’d like to tell potential readers about Sticks and Stones?

I’m sure many new writers will agree that there’s nothing more exciting than knowing your book is out there in the wild. With the COVID shutdown It has been a weird time to be releasing a debut, so of course the support of readers in giving something new a chance is very much appreciated!