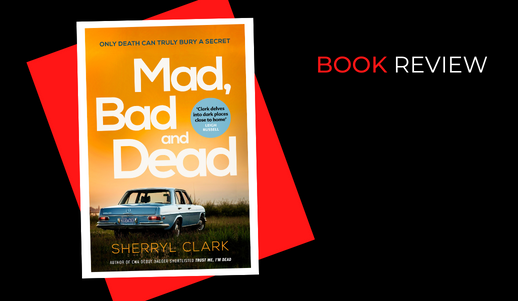 A dead employee. A missing child. Anonymous phone calls in the dead of night. Judi Westerholme’s troubles aren’t over yet…

Already struggling to juggle co-running the local pub along with her new childcare responsibilities for her orphaned niece, Judi does not need her life to become any more complicated.

Yet, as usual, complications arrive in spades: she starts receiving threatening, late-night phone calls before discovering one of her employees, Kate, shot dead.

Judi finds herself caught up in a murder investigation, as well as the hunt for the Kate’s fourteen year-old daughter, who has been missing since the murder.

Add in the uncertainty of her relationship with Melbourne-based D.S. Heath and the fact that her estranged mother’s nursing home keeps urging her to visit, and Judi might finally be at breaking point.

Just wondering to which characters the labels in the title refer?  Not all are dead, but quite a few are bad or mad.

I’ve been a fan of Sherryl Clark’s matter-of-fact crime solver, Judi Westerholme, for three books now. Pragmatic but generous spirited, Judi lives in a ‘real’ Australian world although she speeds between band-aiding disasters at her co-owned country pub and city rescue missions leading to catastrophes. The number of dead bodies, fires and crimes which follow her seem higher than average.

But it is Judi’s compassionate, on-the-spot decisions in caring for her three-year-old Mia as a substitute single Mum or righting wrongs for under-dogs which make her an appealing character.

Well-crafted with good twists towards the end as the story gains momentum and motives beyond the local scene of Candlebark are revealed. The stupidity of a couple of the lower level ‘local baddies’ is a contrast.

The police procedures and technical details of arson and drugs sound authentic as Clark does her research and has actually attended a forensics course.

The supportive friendship from Andre the ex-prisoner chef, and the police access from local cop Connor are vital. As is the always sexually hurried relationship with her city lover Heath.

The exchanges with the teenager widowed by her mother’s murder are authentic. Sullen non‑cooperation. These scenes remind us that Clark also writes YA fiction well.

It’s such a change in a crime novel to have kindness amidst the evil – more relatable and it makes the well-crafted novel more frightening.

There’s just enough back story for those who have not read the earlier books for Mad, Bad and Dead to be read as a stand-alone, but the books are more enjoyable to read in order.