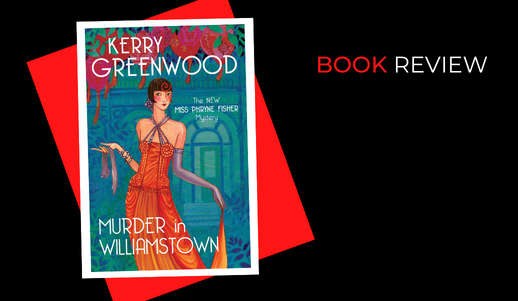 Accustomed to both murder and dalliance, Australia’s favourite detective, the inimitable Miss Fisher, returns in a case that will test her courage and judgement to the full.

When the redoubtable Miss Phryne Fisher receives threatening letters at her home, she enlists her unflappable apprentice Tinker to investigate. But as the harassment of Phryne threatens to spin out of control, her lover Lin Chung is also targeted.

Meanwhile, Dot begins to fear that her fiancé, newly promoted Sergeant Hugh Collins, has gone cold on their wedding. And Phryne’s clever daughters Ruth and Jane begin their own investigation into suspiciously dwindling funds when they are sent to help at the Blind Institute.

None of this is quite enough to prevent Phryne from accepting an invitation to a magnificent party at the house of the mysterious Hong. When the party is interrupted by shocking tragedy, Phryne gathers all of her unerring brilliance to track down the miscreants.

With some unlikely assistance, Phryne is in a race against time to save a pair of young lovers from disgrace and death.

Kerry Greenwood is in top form in her latest Phryne Fisher novel Murder in Williamstown: Eagle-eyed Phryne leads us through the seedy docks of Williamstown concealing contraband goods and burly dock workers with left leanings to the sumptuous milieu of the town’s wealthy residents to the smoky opium dens of Melbourne and the guarded Chinese community.

Greenwood researches in depth – she threads historical facts throughout the novel and quickly wraps the reader in an impeccably detailed tapestry of the era. I always uncover a nugget of knowledge from Greenwood e.g Louise Braille inventor of braille books also produced braille music.

Murder in Williamstown romps along with Phyne’s usual hijinks and incisive mind unravelling clues to hunt a killer. And, it wouldn’t be Phryne without a good dose of sexual dalliance. But Greenwood also tackles some deeper themes: forbidden love, racial prejudice, and, of course, murder. The characters develop along with the story. I was delighted to see the unflappable Tinker track the culprit stuffing threatening notes in Phryne’s letterbox. And Phryne’s daughters, Ruth and Jane, assigned by their school to assist at the Blind Institute, also try their hands at sleuthing. Who is fudging the figures at the Blind Institute?