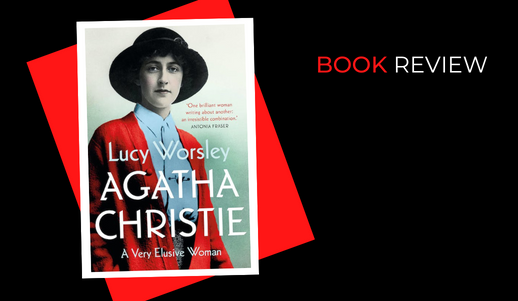 Why did Agatha Christie spend her career pretending that she was ‘just’ an ordinary housewife, when clearly she wasn’t? As Lucy Worsley says, ‘She was thrillingly, scintillatingly modern’. She went surfing in Hawaii, she loved fast cars, and she was intrigued by the new science of psychology, which helped her through devastating mental illness.

So why – despite all the evidence to the contrary – did Agatha present herself as a retiring Edwardian lady of leisure?
She was born in 1890 into a world which had its own rules about what women could and couldn’t do. Lucy Worsley’s biography is not just of an internationally renowned bestselling writer. It’s also the story of a person who, despite the obstacles of class and gender, became an astonishingly successful working woman.

With access to personal letters and papers that have rarely been seen, Lucy Worsley’s biography is both authoritative and entertaining and makes us realise what an extraordinary pioneer Agatha Christie was – truly a woman who wrote the twentieth century.

First published on 10 October 2022 in Sydney Arts Guide and reproduced with permission.

The latest book by Lucy Worsley is a fascinating, complex, comprehensively researched biography of Agatha Christie (1890-1976), ‘The Queen of Crime’, who has provided us with both Hercule Poirot and Miss Marple. It is divided into ten parts and forty-one chapters, with a preface. Notes and a terrific index are included at the back and photos are scattered throughout.

Worsleyexamines Christie’s long life, her numerous books and multi-faceted personality – why did Christie ‘pretend to be ordinary’, regarding herself as a ‘traditional housewife’? In some ways she was breathtakingly modern for her times – she worked and was paid for it, and was quite adventurous – surfing in Hawaii, loved fast cars and was intrigued by the new science of psychology, which provided a background to some of her novels. She forged a public image, becoming in some ways an Institution, brand or business, while concealing her real self. Worsley also demonstrates how in some ways Christie was a radical feminist ahead of her times, with the changes brought about by both the World Wars and adjustments to divorce laws for example- but also held to us today some rather shocking racist views that were quite acceptable during her lifetime.

Christie could be extremely difficult to deal with, but also had an incredible energy and a huge penchant for living in the moment and having fun – she relished roller skating, speeding, flying, surfing, skinny-dipping and food. Simultaneously she had a far murkier aspect that allowed her to create grisly murders combined with meticulous inventive plots. Another facet of her personality was a fascination with archaeology.With the money from her books, Christie bought several properties, and also paid for her second husband Max’s archaeological digs (most unusual). She was also mostly a rather aloof, absentee mother to daughter Rosalind. Worsley charts their relationship.

Christie’s contemporaries in ‘the golden era’ were Dorothy L. Sayers, Ngaio Marsh, Margery Allingham and  Josephine Tey. Christie was confirmed by UNESCO in 1961 as the world’s best selling author and nowadays she is acknowledged as the bestselling novelist of all time.

Worsley analyses Christie’s work processes, and how she was writing about a hundred years ago or thereabouts, so class structures, morals and values of society at that time are emulated in her work. Yet Christie was also somewhat a groundbreaker in that respect too – observe how some characters are disadvantaged or subtly ‘ different’. Worsley shows how Christie put women’s lives at the forefront of her novels and how her real life influenced her stories– eg  she worked at a hospital pharmacy, serving there during both World Wars. She also points out various ‘ Christie tricks’ in the books .

Christie was also a writer of short stories, a playwright and was involved in some of the early films of her work as well as the TV series. Her play The Mousetrap has run for many years in London, breaking all records and a version of that production is currently playing in Sydney, followed by a national tour. And there are the Poirot and Miss Marple TV series, and the various film versions of films such as Murder on the Orient Express and Death on the Nile.

Worsley charts Christie’s life, from growing up in a quite ‘Victorian’ family and attending ‘finishing school’ rather than being university educated and being a debutante . Then in 1912, Archibald Christie appears – Worsley charts their marriage , and devotes quite a discussion as to what really happened in 1926 when Agatha famously ‘ disappeared ‘. Was it planned? Was it fake or real? Was Agatha’s memory loss all an act? Worsley analyses the situation extensively and provides much food for thought as to how Agatha at that time suffered a mental crisis and tried to cut herself off from her married life completely as a reaction to the death of her mother, combined with the discovery that Archibald Christie had a mistress and was demanding a divorce. The way psychological disorders at the time were treated is also analysed. Her second marriage to the archaeologist Max Mallowan was in many ways a far more balanced and stylish partnership.

Her sad decline at the end and her legacy are also scrutinized.

A very sympathetic, excellently written and researched examination of the elusive Agatha Christie.