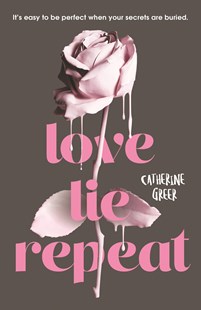 It’s easy to be perfect when your secrets are buried.

Three girls, loyal to each other? That never happens. All the groups of three implode eventually. Two in, one out. Change. Betrayal. Again and again.

But not us. I make sure of it. I make Ash and Ruby see that our power is in our three-ness. We can do what no other trio can.

Thick, thin, boys, mothers, divorce, other girls, secrets, lies, all of it.

I’ll keep us safe. Whatever it takes.

Three drop dead gorgeous sixteen-years-olds, Annie, Ruby and Ashlin are only children, from dysfunctional, entitled North Shore families. Together they attend a private girls school and form the friendship and singing group Sirens. They are under a lot of pressure, through manipulation rather than love and compassion from their unhappy mothers, to be perfect. Encased in their cocoon of privilege, the Sirens are believable characters as is their entitled world and the depiction of the relationship between the Sirens and the interloper, Trip.

Coming from a solid working class family and educated in a rough state school, I initially struggled to relate to the world of Annie and her friends. As an individual, however, I was drawn to Annie’s story because she’s a strong sixteen-year-old who’s ‘not some underdog.’ It was this aspect of her character that drew me into her story. I guessed from the start she would turn out to be an unreliable narrator and was on my guard.

Annie, Greer’s point of view character, appears to be the one Siren without serious ‘issues’. Ruby is anorexic. Ash is struggling with gender identity. To an outsider it appears Annie is the rational one in the trio. However, the introduction of her Aunt Margaretta into their home, her parents’ subsequent divorce, her dad’s remarriage, his new baby and the arrival of the dazzling Trip – Ashlin’s step brother – all conspire to ruin her happiness.

Love Lie Repeat, is all about Annie. She feels like, but refuses to be, the spare part in her family. Central to her survival is maintaining her position as leader of the Sirens.

A keen, curious observer of her friends and family, Annie is determined to manipulate the people in her life so that nothing more changes believing all will be safe, provided her secrets stay secret.

The drama is driven by her determination not to be the underdog. She sets events in motion that remove the obstacles that stand in the way of her being the centre of attention.

Who is responsible for all the disasters that follow in her wake? If Annie is, will she be held accountable?

Annie grieves the physical loss of her re-married Father, and is jealous of soon to be born daughter v2. She takes this out on her emotionally distant mother who earlier transferred her affection from her daughter to her, now deceased, sizzling sister, Margaretta.

Greer teases the reader with hints, takes the reader down blind alleys, and back again, and makes accusations that nobody in Annie’s world questions.

In an essentially linear narrative, the reader is left chasing questions that are partially answered through flash-backs. Why did her father really abandon her? What happened to Aunt Margaretta? Why did her mother become so distant?

Annie falls for Trip and Trip reciprocates, but jealousy between the Sirens reveals the cracks and fissures in their relationship. Annie compares Trip’s half-truths, lies and evasions with her father’s and Trip is found wanting. She thinks he’s also keen on Ruby and tries to manipulate him into loving her by dropping him. Does she push him too far? Is this behaviour reminiscent of Ash’s favourite poem, The Siren Song, by Margaret Atwood. Is the unrepentant epitome of the mythological Sirens story relived in the way she treats Trip?

When Annie sees the Sirens are unravelling, she manipulates them convinced she’s helping ‘people learn their lessons’ and thus keeps ‘people safe.’ Disaster follows as she exposes their secrets but, as the subtitle states, keeps her own buried. Will Annie be the glue that binds her friends together?

Behind the lies, half-truths and misdirection there are coming of age truths in Love Lie Repeat. Truths about her mother’s love. Is an unreliable love, like her father’s love, a love worth pursuing? Annie acknowledges these truths but choses to ignore them. Her advice to herself is often sound, but she doesn’t follow it through. Towards the end her mother’s advice is also solid, but Annie doesn’t embrace it.

Love Lie Repeat, is a carefully crafted page turner in which Greer keeps the drama and the tension moving forward at a cracking pace. As I was taken down the Annie rabbit hole of secrets and deceits, I turned each page with the vain hope, even when she realises her mother has known her worst secret all along, that she will acknowledge them and not rinse and repeat.

As the title nuances, Annie loves and she constantly lies and then, at the end, she cycles back to the close friendship of the Sirens and repeats. Will she ever change? Her final words are ambivalent: ‘With some things, like love and other tragedies, it’s better not to know.’