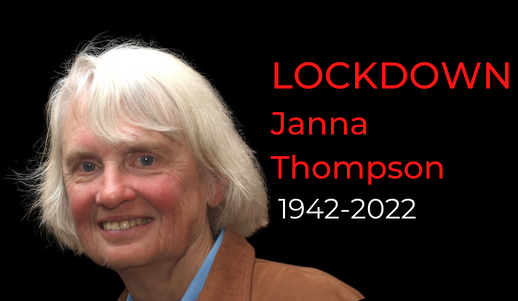 Janna Thompson, one of Australia’s most distinguished philosophers, was also a devoted fan of crime fiction and a long-time member of Sisters in Crime Australia. When the pandemic hit Melbourne in 2020, she was inspired to try her hand at crime writing.

The result is Lockdown (Clan Destine Press), a novel that explores how the invisibility of older women can provide the perfect cover for criminal investigations. No one would suspect that a retired philosophy professor, who is prone to wearing pastels, would be on the track of uncovering wrongdoing.

Janna put the finishing touches to Lockdown just before her death from multiple brain tumours in June at the age of 79.

Janna’s protagonist, quiet, unassuming Meg Thorne is practically invisible. But the retired philosophy professor has plenty of opinions – like, why do people dismiss little old ladies as harmless?

Meg and her two friends, the tough-as-nails Dorothy Arden and the boisterous Lila Gatti, have decided to be a ‘force for good’ with their Grey Ghosts Agency, because little old ladies can go undercover where other detectives can’t.

As Meg says, “Old people become invisible, especially older women. Even when we’re noticed, we’re usually regarded as inconsequential, harmless, or a waste of time. Except for the Queen. I amused myself by thinking of expressions used to denigrate or patronise elderly women: crone, witch, spinster, old maid, chirpy old lady, woman of a certain age; and if she tried to look attractive, she was ‘mutton dressed as lamb’.”

“I really relished this book. In writing it, Janna clearly discovered the pleasures that much of academic work manages to suppress (with its references and footnotes) – the joy of making things up, the fun of liberating the imagination.

“This is a crime novel that skilfully weaves together suspicion of a contemporary crime with a character’s vague memories of an historical crime. It utilises politics of ageism and human rights with the comforts of philosophy, the camaraderie, and friendship of the sisterhood . . .

“The Grey Ghosts are contracted to deal with a son’s concern for his 85-year-old mother, Sara Brighouse, living in aged care. Sara is clearly frightened of someone or something there but unable to talk about it. The setting is Sunnyvale, a luxury aged care facility.

“Now I’m an aged care activist and researcher and Board Director of an NFP that runs retirement villages and aged care facilities. And I supported my mother through two years of aged care living. So, much about the Sunnyvale rings true to me:

“Meg goes into Sunnyvale as an undercover agent to address the son’s concerns – posing as someone in need of respite care.

“Janna, writing as Meg, beautifully describes the ’elderly invisibility’, the ‘sad situation ‘of the elderly as an oppressed social class with no hope of liberation’.

“With some of the typical wit and humour that splices through the book, Meg reflects that the recruitment of older women might have advantages for spy organisations or assassination groups who might never suspect these women to be a danger and asks – “Why hadn’t ASIO or the CIA thought of that?”

“Janna builds great tension throughout the story. She captures so well the fear so many older people, (and aged care staff), had during those first months of the epidemic – experiences of disrespect and the loss of basic freedoms during the Covid lockdowns that those of us here today enjoyed.

“She reminds us of the complex public debates of this terrifying time – issues of individual versus collective rights and responsibilities.

“A just-released audit of Aged Care complaints by the Older Persons Advocacy Network includes shocking details of abuse and neglect.

“One of the great pleasures of Lockdown is the way that Janna weaves in philosophical lessons via the character of Meg. The teachings of Socrates, Epicurus, de Beauvoir, Spinoza, and Marcus Aurelius are just some of those offered to the reader but they are always in easily digestible segments and practical contexts that reinforce the book’s tensions and challenges for the characters.

“In one key scene, Meg is invited to give a lecture to other residents – and poses the question as to whether an older person is morally (and legally) responsible for horrific acts they committed in their youth.

“There is of course a grand finale the resolution that all good crime books demand. As Meg says to other residents during her philosophy talk, “We are moral beings and we want justice to be done.”

“But the world does not always deliver justice. It’s up to us as readers to determine whether the resolution satisfies our need for justice in a world that has been – and still is – discriminatory and unjust for older women.”

You can buy Lockdown here.