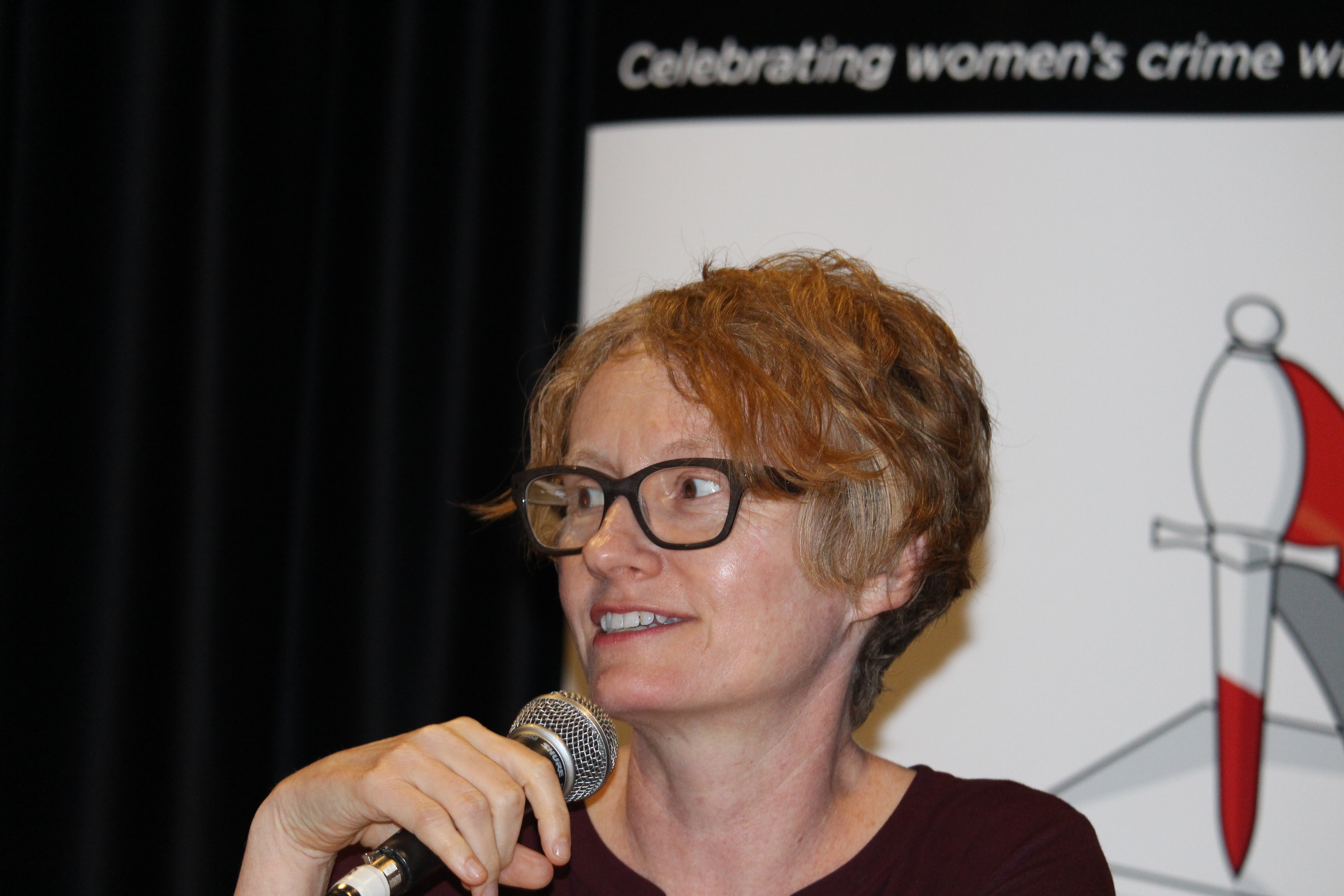 In the last couple of years, US author Amy Stewart has attracted world-wide attention with Girl Waits with Gun and Lady Cop Makes Trouble (Scribe), based on the forgotten, true story of one of the USA’s first female deputy sheriffs, Constance Kopp. She spoke recently to Robyn Walton, a Sisters in Crime National Convenor, about her latest novel in the series, Miss Kopp’s Midnight Confessions (Scribe, 2017). 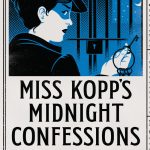 Hello Amy and congratulations on the release of your third novel in the Kopp Sisters series. Sisters in Crime Australia enjoyed having you as a guest panelist in February this year following the publication of the first two novels.

Thank you! Can I come back? I loved everything about Australia, and it’s sounding particularly good now, as winter sets in here in Portland. My dream is to find a way to spend two or three months in Australia every year, starting in January.

Constance Kopp, now officially employed as a deputy sheriff and jail matron, is bothered by a “steady uptick in morality cases … girls brought in under charges of waywardness or incorrigibility”. Reasons for this trend in 1916?

I think that wayward girls have been locked up or otherwise punished for as long as there have been wayward girls. But in the United States, it really became a very public issue after Congress passed the Mann Act, which was meant to crack down on sex trafficking but, actually, made it easy to punish women for immoral behavior. The Mann Act made it a crime to transport a woman across state lines for an immoral purpose, which meant that if a woman went on a date with someone who wasn’t her husband, and it involved going from New Jersey into New York City for the evening, they’d just committed a crime.

Both men and women were arrested, but men had an easier time of it, because they generally could afford a lawyer while women could not. Also, women were seen to be contributing to immorality and spreading disease, while men were just being men. So, women were more likely to get locked up, sometimes for years, with no due process at all, simply for sleeping with a man they weren’t married to.

And how did you come to decide on this theme for the third Kopp Sisters storyline?

The novels are all very closely based on real events in Constance’s life. These were the very next couple of cases she worked on after the events in the second book (Lady Cop Makes Trouble) concluded. I did select those two cases out of several she was involved in, and I changed the timeline slightly so that they would overlap more, but otherwise I was just following what happened in real life.

In case #1, conscientious Edna has left home to work in a factory making ammunition for the Great War. Why is Edna in trouble with the law?

In those days, parents could go to the police and report their daughters as wayward or incorrigible. It was pretty common for parents to seek help from the police when they found they couldn’t control their daughters (or sons, for that matter). In the case of young women, many of them wanted what we all want — to go out in the evenings, to spend their wages on whatever they wanted, to move out of the house, get a job, and rent a little place for themselves. That’s all Edna did — she simply moved out, at the age of 18, to get a job and live on her own — but that upset her mother so much that she reported Edna to the police, and the police actually arrested her. Fortunately, Constance was on hand to look into it and find a resolution.

In case #2, spirited Minnie is charged with ‘illegal cohabitation’. What led up to Minnie’s arrest?

Both Minnie’s and Edna’s stories are true. In Minnie’s case, she ran off with a man she met on a riverboat. Her situation was a bit more serious, because she did run off to be with a man who was not her husband. Initially, this was portrayed in the media as a sex trafficking case, suggesting that she was dragged away against her will, but that theory seemed to fall away pretty quickly. I don’t know exactly how the case was resolved in real life, but, in my telling of it, Minnie makes it pretty clear that she was the one calling the shots, and that she was not a victim. That complicates things for Constance. It doesn’t look good for the lady deputy to take the side of young women who want to be turned loose on the streets to tempt men into lives of immorality and sin. 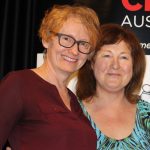 Isn’t it the case that when Constance was a teenager she had to quietly leave home for a while? Does this private history affect her views and actions?

I don’t want to give too much away, for fear of spoiling it for people who haven’t read the earlier books, but Constance definitely grapples with her own past while she’s trying to help these young women. And again — all of that is true! The parallels between her own life and the lives of the women coming through the jail surely must’ve been something that the real Constance Kopp had to deal with.

Constance is increasingly exasperated by the middle Kopp sister, Norma. What is Norma up to?

For this installment of the Kopp sisters’ story, Norma’s life is entirely fictional. She managed to stay out of the papers, so I know very little about what she was really up to. I have given her a fictional interest in messenger pigeons, for a few reasons. First, Norma does not particularly like other people. I needed to come up with something that she did like and did care about, and I didn’t want it to be anything too adorable, like a fluffy little dog. So, Norma keeps messenger pigeons, and her sisters are appalled by it. I also found it interesting to research how pigeons were used for communication at that point. But I can promise readers — this is all going somewhere! Norma’s pigeons are going to take her places in later books.

“Kopp is always a cop, no matter where she goes and what she does,” shouts an annoyed theatrical manager. Fair comment?

I think that Constance really did live and breathe her work. She said as much in newspaper interviews. She didn’t want to get married or have children. She just wanted useful work for herself, and some sort of role in society where she could command respect and make a difference. I think that most people who work in law enforcement have a hard time stepping away from that role when they go home.

Your novels are selling well internationally. Which markets are most enthusiastic and what kinds of feedback are you getting from readers?

Apparently the Spanish edition is doing quite well, but honestly, I hear from Australian readers the most! This could be because I was there last year on book tour and made so many new friends, but I also suspect that Australian readers are particularly interested in history, social commentary, and strong women characters. It also helps that I have such an enthusiastic publisher in Scribe. They stay in touch with me and they really get behind every book they publish.

Any likelihood that we’ll see the Kopp sisters on screen?

I hope so! The TV rights have been optioned by Elizabeth Banks’ production company, Brownstone Productions. Two very talented women screenwriters are out pitching the show to networks. They just came off a season of writing for VEEP, so they’re incredibly busy, but their enthusiasm for the Kopp sisters really shows. It’s a long shot, but I hope they can make something happen in Hollywood.

Finally, Amy, are there other aspects of Miss Kopp’s Midnight Confessions you’d like to mention?

The vaudeville actress in the novel, May Ward, is also a real person, as is her husband Freeman Bernstein. Last year I discovered that a descendant of Freeman Bernstein had just written a biography about him. I’ve since gotten to know the author, a political writer named Walter Shapiro, and we’ve even done some events together. He came across the Kopp sisters when he was writing about Freeman and thought, “Somebody ought to write a book about those sisters.” So, when I sent him an email, he wrote me back within about five minutes and we’ve been in touch ever since.

Anyone interested in Freeman Bernstein should check out Walter’s book, Hustling Hitler: The Jewish Vaudevillian Who Fooled the Führer. Freeman Bernstein really did try to swindle Hitler, if you can believe it, in the late 1930s. It’s a remarkable story.