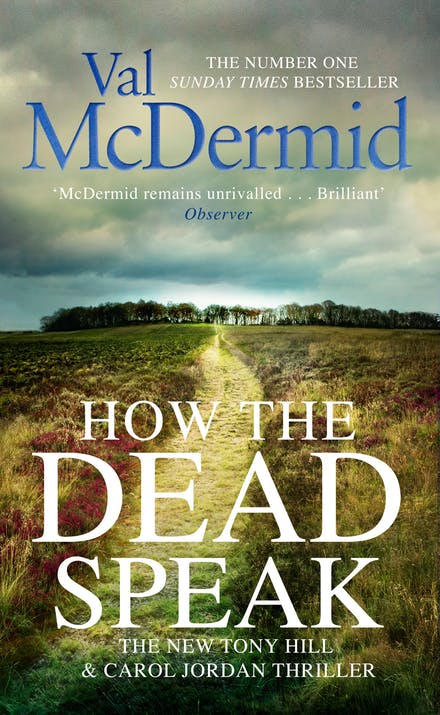 We are all creatures of habit. Even murderers . . .’

When human remains are discovered in the grounds of an old convent, it quickly becomes clear that someone has been using the site as their personal burial ground. But with the convent abandoned long ago and the remains dating back many years, could this be the work of more than one obsessive killer?

It’s an investigation that throws up more questions as the evidence mounts, and after their last case ended catastrophically, Tony Hill and Carol Jordan can only watch from afar. As they deal with the consequences of previous actions, someone with a terrifying routine is biding their time – and both Tony and Carol find themselves closer to the edge than they have ever been before . . .

For the last 24 years and through 11 books Carol Jordan and Tony Hill have been part of my life. Yes, I know they are fictional characters, created in the dark imagination of Val McDermid. But I don’t care. I have followed them faithfully down some incredibly dark rabbit holes, peered over their shoulders at some gruesome and unfathomable crime scenes. I’ve eavesdropped on their conversations about the motivation of sadistic killers, the next investigative step in trying to catch the mongrels and then held my breath whenever they were put in danger. So it was with a sense of personal loss that I reached the end of How the Dead Speak. If the rumours are true this is the end of the series.

For those of you who don’t know Carol and Tony, she was a Detective Inspector in the north of England, he a clinical psychologist who specialised in criminal profiling. From the start their own relationship was full of tension, an impossible attraction to each other and a deep respect for one another’s abilities. They are both deeply flawed individuals, Tony is impotent, largely due to the dark secrets that are slowly revealed about his narcissistic mother and his childhood. Carol, for her part, has been to hell and back in many of the cases she has handled, including some that struck very close to home and the claws of PTSD have slowly sunk into her.

Disaster struck at the end of Book 10 in the series, Insidious Intent: Carol was kicked out of the police force and Tony was sent to prison. So it was only natural that the question on the lips of us diehard McDermid fans was how on earth was she going to write a story when she did that to them?

It’s never wise to underestimate the storytelling power of Val McDermid. In How the Dead Speaks Carol has retreated to her barn that she’s renovating and shares with her Border Collie, Flash. Tony is in prison, writing his long overdue book and trying to find a useful purpose while he’s locked away. He is refusing to see Carol unless she seeks treatment for her PTSD.

Meanwhile the ReMIT team that Carol once headed is re-formed, this time headed by the dour and unimaginative DCI Rutherford. And she’s back, the lovely DI Paula McIntyre, on whom I have a big crush. Carol Jordan was her mentor and understood Paula’s strengths, allowed her to run with her instinct when others would have reined her in. A few more familiar faces return to ReMIT, including Stacey Chen, but a couple of new ones appear and the tension and lack of cohesion in the team are obvious.

Although this story is heavily character driven there is crime aplenty. A developer has bought an old convent and as they’re running a digger through the front lawn they unearth a significant number of skeletons that turn out to be the remains of up to 40 teenage girls. A while later a cadaver dog finds more remains in the vegetable garden of the live-in caretaker, remains that are definitely not those of teenage girls.

Meanwhile Carol is approached by Tony’s mother, Vanessa. She is a wonderfully vicious character and she threatens and coerces Carol into helping her find the man who sucked her into a Ponzi scheme and stole millions from her. As if that isn’t strange enough another adversary appears out of the blue, defense lawyer Bronwen Scott. She wants to enlist Carol’s help to prove that a convicted murderer is innocent.

While reading How the Dead Speak I felt a small personal loss. It was strange to not have the personal interactions between Carol and Tony and I missed that. It also felt strange that there was no full-on gritty serial killer investigation underway. In terms of the crimes Val manages to conjure up these were far from the worst. The investigation was, in some ways, the most underdone part of the story.

Don’t get me wrong. This is a wonderful book and I read it in a day. It takes a master storyteller to pull so many seemingly disparate threads together. And especially to hold true to her characters, and keep them fresh, for eleven books.

And DI Paula McIntyre remains a wonderful character with so many untold stories left in her. I hope, that somewhere in the mind of Val McDermid, Paula is haunting her. I hope there is more to tell.

To me it felt like How the Dead Speak was the coda to the wonderfully complex, dark and mesmerising symphony that has been the Carol Jordan and Tony Hill series. I might be wrong, there could be a whole reinvention of the pair.

Val McDermid is one of my favourite crime writers. I loved How the Dead Speak even though it made me uncomfortable. And strangely sad.