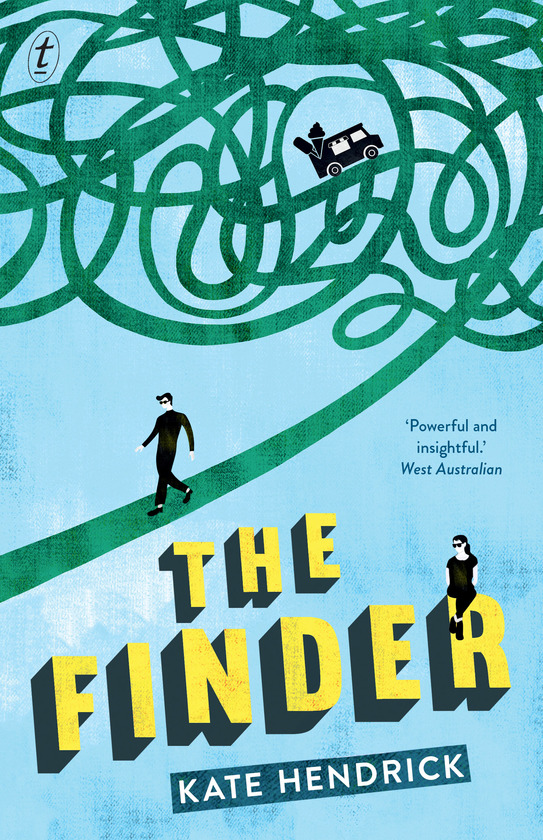 When Lindsay meets Elias the signs aren’t promising. She’s a grungy introvert who doesn’t want to talk to anyone. He’s a teen fashionista who can’t shut the hell up.

But since Lindsay tracked down a runaway kid, word’s got around that she knows how to find people. And Elias is looking for his birth mother. And he has money, and Lindsay’s perpetually broke… So that’s how this oddest of odd couples teams up.

But the thing is, Lindsay wasn’t actually trying to find the runaway. It’s just how she looks at the world. Not idly, like most people, but really looking. Scanning every house, every face, every car. That’s because someone is missing in Lindsay’s life: her identical twin Frankie, who disappeared when they were eight. Since then, her parents have kept themselves busy. And angry. And Lindsay has been…looking.

In Elias, despite their differences, she might have found someone to look with.

According to the publisher’s website, The Finder is recommended for 14+ readers. Kate Hendrick’s second book deals with themes of families, grief, relationships and identity.

The main character, Lindsay, is a loner whose prickly character keeps people at arm’s length. She earns the nickname ‘The Finder’ by helping fellow students locate items and uses her acute observation skills to find and return a runaway girl to her family.

Elias approaches Lindsay to assist in a quest to find his birth mother, but the only clue he possesses is his birth certificate. His adoptive parents are supportive of that desire. Elias and Lindsay are an unlikely pair. Elias is the opposite of Lindsay – he’s fashion-conscious, quirky, outgoing and friendly.

The four families featured in The Finder reflect their particular life experiences and choices made by their parents. Hendrick is a school teacher and her professional insight has helped her create authentic characters.

I liked the way Lindsay and Elias’s relationship develops, and how the twist at the end of the novel affects their respective identities – positively and negatively.

Unable to find any leads in the hunt for his mother, Elias turns to Lindsay who quickly tracks down possible relatives through Google. Elias lacks confidence to approach the relatives alone so coerces Lindsay to accompany him on visits.

Lindsay’s family has a secret, hinted at throughout the book, but finally revealed at the dinner table when her father suggests ‘We need to get Lindsay out of here, that’s what we need.’ Following this revelation, Lindsay takes off which allows her time to research the location of Elias’s mother.

At this stage of the book I was hooked, reading at every opportunity. I felt for Lindsay – rejected by her parents, and also for Elias’s growing frustration. He locates the mother named on his birth certificate, and is warmly accepted by her family.

But the story doesn’t end there. The unlikely pair and another youngster embark on a final and eventful road trip. The book ends with an unexpected plot twist and evidence that Lindsay and Elias have changed.

I recommend this book for teenagers. The story cleverly reflects how people’s histories can affect them for years.