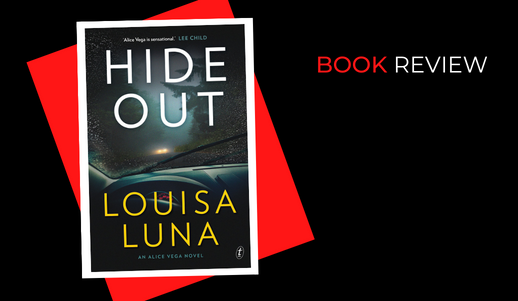 A powerful new thriller from Louisa Luna. Alice Vega and Max Caplan uncover a network of American white supremacists in their search for a long-lost counter-culture hero.

In this riveting novel, the fearless and resourceful private investigator Alice Vega is hired to track down Zeb Williams, an athlete who went missing over thirty years ago after a famous loss. Zeb’s mysterious disappearance has earned him a cult following and still haunts the marriage of his ex-girlfriend.

Estranged from her partner and ex-cop Max Caplan, Vega heads alone to a small town in the Pacific Northwest of the USA where Zeb was last seen, and where an anxious community is threatened by a local hate group, Liberty Pure. As Vega infiltrates the group, she uncovers disturbing secrets that put at risk her own father and Cap’s daughter. No one can cut to the truth like Alice Vega, but this time is it too much for her to handle?

Hideout is the third of Louisa Luna’s Alice Vega novels. Those unfamiliar with the series will be reassured to know Luna deftly includes just the right amount of detail from Vega’s previous exploits to settle any new reader’s nerves. Hideout begins in the clutch minutes of a famous college football match, a scene in which feted college footballer Zeb Williams takes off with the ball in the wrong direction, keeps running out of the stadium and then disappears without a trace. Decades on, sports fans still remember his name and, naturally, the footage of Zeb’s infamous dash off the pitch can be found on the internet for all to enjoy. The baffling mystery has even attracted a league of conspiracy theorists, determinedly turning up sightings of the footballer as if he were Elvis or Bigfoot. But when Alice Vega is hired to take one last shot at tracking down the missing footballer, she ends up investigating much more than a cold case. Meanwhile, on the other side of the country, Vega’s erstwhile partner Max Caplan or ‘Cap’ nurses wounds, physical and emotional, from his last bruising case with the enigmatic investigator.

At the heart of Hideout is an examination of how white supremacist groups have proliferated across the United States. When Vega begins her investigations in Ilona, a small town in Oregon, she finds a community on edge, divided by local hate group the Liberty Boys. Vega’s exploration of the small town provides a well-considered fictional example of how easily white supremacist ideology can take hold in small communities, particularly those in which the rule of law has been allowed to languish due to inertia or corruption. Central to this proliferation is the role played by the internet and how online forums provide fertile ground for anonymous users to share their views without real life consequences. Interestingly, Luna mentions Christian Picciolini’s fascinating memoir White American Youth in her acknowledgements, pointing to how it helped inform the mindset of some of her fictional characters. Luna’s novel explores the ways white supremacist ideologies take hold and how easily vulnerable young people can fall prey to the extremist groups that promulgate them. It also shows how the internet allows hate networks to both incite and covertly direct its members to perpetrate crime.

Although Vega’s investigation relies on plenty of shrewd observation and physical bravery, she also uses her skills in the shadowy corners of the internet to uncover the real identities of some of the Liberty Boys. One of Vega’s associates, a hacker known simply as ‘The Bastard’, is ready and able to assist and there’s plenty of fun detail for the tech-curious. As readers, we never get to meet The Bastard, nor do we get any personal detail about this character, but I’d be very interested to see where Luna goes with this mysterious hacker in subsequent novels and what might be revealed about their true identity.

As the narrative unfolds, it becomes apparent that Vega and her ex-partner Cap have a significant amount of unfinished business. With both characters located on opposite sides of the country, Luna keeps the reader guessing as to how this might be resolved. I enjoyed this aspect of the novel, particularly both characters’ wounded pride. The tension between the two is well-written, Vega’s stoic self-reliance and her fierce desire to protect those she cares about. Cap’s presence, and the way he also navigates a fraught relationship with his daughter, provides an emotionally satisfying counterpoint to the tough and enigmatic Vega.

The action scenes in Hideout are particularly well written. Apart from a couple of Tarantino‑esque moments, the violence is visceral but grounded in reality. It’s fair to say Alice Vega is an investigator who knows how to handle herself in a fight, which is just as well because she certainly picks plenty in this novel.  The small town setting also provides some memorable minor characters as the truth is gradually and poignantly revealed. I look forward to reading more books in Louisa Luna’s Alice Vega series.

This is the third novel in the Alice Vega series.

Not having read the first two Vega novels, I was still able to pick this book up and get a sense of a complex yet intimate relationship between the main characters, Alice Vega, Max Caplan (Cap) and his daughter Nell as pieces of a previous case and past trauma is revealed.

I was immediately hooked in by the intensity and fast pace of this missing persons cold case.

Private Investigator Alice Vega is hired to find Zeb Williams, a college football player who hasn’t been seen since running off the field during a game in 1984.

Vega follows the only lead she has to go on, a photo taken after Zeb disappeared of Zeb with a woman called Cara Simms and two men in front of a Café in a small town. Vega follows this case to that small town of Ilona where Zeb was last seen.

Tracking down Cara one of the last people to see Zeb, Vega quickly gets side-tracked by a local hate group of white supremacists when she learns they have been terrorising Cara and others in town.

Things get complicated when Cap decides to help the investigation from afar and his daughter Nell becomes a victim of the hate group herself.

Vega finds an ally in an eccentric elderly man called Dart, also pictured with Zeb in the photograph. He has a fondness for guns and a vague memory of his friendship with Zeb and he agrees to help Vega find out what happened to him.

As soon as I met Dart in this story I could picture him, a typical character in a small-town novel. An outdated TV star now a recluse living in a trailer park with only part of his mind intact. I liked him immediately and found myself smiling at his blunt manner and actions that were always performed with a gun in hand.

I loved the fierce-lessness nature of Vega, her addiction to drama and chaos was clear as she went after those responsible for terrorising Cara and her nephew despite Cara’s refusal of the help, making her dislike for Vega clear from the onset.

Adrenaline filled from beginning to end, it kept the pace and was hard to put down when life beckoned me away. I was left wanting more and plan to now read Louisa’s first two Vega novels and fill in some gaps.