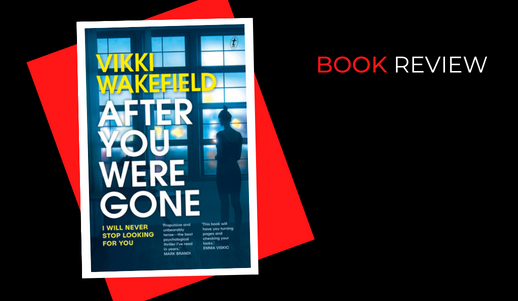 What happens to a family when a child goes missing?

In a busy street market, Abbie lets go of six-year-old Sarah’s hand. She isn’t a bad mother, just exhausted. When she turns around, her daughter isn’t there.

Six years later, Abbie is in love and getting married. But her fragile peace is constantly threatened: not knowing what happened to Sarah is like living with a curse.

Then she receives a phone call from an unknown number.

A man claims to know what happened to Sarah, but if Abbie tells anyone or fails to follow his instructions, she’ll never find out. How far will Abbie go to know the truth?

Prize-winning and hugely popular author Vikki Wakefield turns her hand to the psychological thriller in this unputdownable novel that will disturb your dreams!

Vikki Wakefield’s After You Were Gone is a riveting read that had me breathless as to what had actually happened to Abbie’s daughter. The narrative takes part in three parts – Before, Now, After.

‘Before’ outlines Abbie’s life before Sarah was born, the circumstances surrounding her conception and up to her disappearance.  ‘After’ takes place after Sarah is taken and how Abbie has tried to cope in the intervening six year. ‘Now’ depicts Abbie in the present from her wedding to Murray, seeing Cass and the memories that stirs, the picture by Sarah that arrives in the post, the phone call from the man who claims to know what happened to Sarah and what Abbie needs to do to find out.

Throughout After You Were Gone, Wakefield depicts the reality of motherhood, and how mothers are often judged for their actions and whether or not they are being ‘good’ mothers as defined by others. This is particularly evident in the public’s perception and media depiction of Abbie and what they viewed as her role in what happened to Sarah. For Abbie this is compounded by her own guilt about that happened at the market that day six year ago, and her own action in those ‘five minutes’. It is this guilt that drives Abbie since the day of Sarah’s disappearance and underscores her inability to let go of Sarah. It is the not knowing what has happened to Sarah that is constantly in the forefront of Abbie’s mind and is then subsequently exploited by the man who calls Abbie about what really happened to Sarah.

At the same time, Wakefield also depicts the complex nature of the relationships between mothers and daughters. This is shown through the strained relationship of Martine and Abbie, the judgemental way in which Martine treats Abbie once Sarah is born, and then after she disappears, never allowing her to forget Sarah. This is then juxtaposed against the relationship between Abbie and Sarah, and despite Abbie’s love for Sarah, Wakefield is able to capture the reality of being a young mum with limited emotional and financial support. Which one can see most likely underpinned Abbie’s actions in those ‘five minutes’. Similarly, the bond between the sisters Abbie and Jess is undoubtedly strong, but again a strain is placed on this relationship as a result of Sarah disappearing, and the impact this has on Jess and her ability to forge her own life. The observations Wakefield makes about how Abbie is victim of gaslighting, and manipulation is depicted not only in her relationship with Martine, but also her relationship wit Murray. There are hints by Wakefield that Murray is manipulative towards Abbie as depicted by the way in which he avoids her questions about the nature of his relationship with his ex-wife, and by the end of the novel the reader is left with questions about Abbie’s future with him. Another example of the gaslighting and manipulation that occurs is in the relationship between the unnamed man and Abbie. The reader is forced to question if he actually knows what happened to Sarah, or is he simply enjoying exerting power and control over Abbie, and really doesn’t know what happened to Sarah.

Wakefield captures Abbie’s descent into ‘madness’ in her quest to find out the truth about what happened to Sarah and is able to depict this in such a way that the reader can relate to this and most likely would do the same thing themselves if they were in this situation. The twist that the reader will not see coming is how Wakefield writes about how one simple misunderstanding six years before Sarah was born, put in place a course of action that no-one saw coming. It was breathtaking how Wakefield wrote about Abbie’s perception of what happened, and Sarah’s ‘father’s’ perception of what had happened. That revelation was truly heartbreaking, and in not naming the father, Wakefield allows the power of the narrative to remain with Abbie. Lastly, Wakefield ends the novel in an uplifting manner about the future and was lays ahead for Abbie and Sarah.