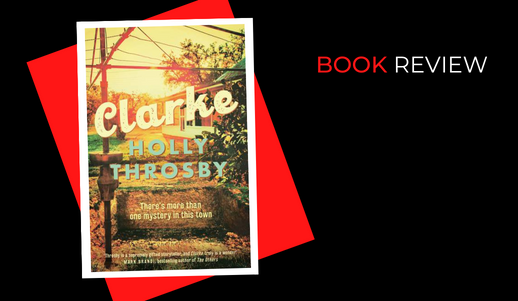 On a hot morning in 1991 in the regional town of Clarke, Barney Clarke (no relation) is woken by the unexpected arrival of many policemen: they are going to search his backyard for the body of a missing woman.

Next door, Leonie Wallace and little Joe watch the police cars through their kitchen window. Leonie has been waiting six years for this day. She is certain that her friend Ginny Lawson is buried in that backyard.

But the fate of Ginny Lawson is not the only mystery in Clarke. Barney lives alone in a rented house with a ring on his finger, but where is Barney’s wife? Leonie lives with four-year-old Joe, but where is Joe’s mother?

Clarke is a story of family and violence, of identity and longing, of unlikely connections and the comedy of everyday life. At its centre stands Leonie Wallace, a travel agent who has never travelled, a warm woman full of love and hope and grief, who would do anything in the world for Joe.

Australian musician and author Holly Throsby has said in interviews that the idea for her latest work, Clarke, came while listening to the True Crime podcast, Teacher’s Pet. What if you were unaware that someone had gone missing in the house you were living in and, what’s more, what if the police appeared at your doorstep with a warrant to dig up your garden for a body? This is what happens to Barney Clarke (no relation). His neighbour, Leonie, was friends with the missing woman Ginny Lawson and has always believed Ginny didn’t just leave her husband and kids out of the blue.

But there is more than just one missing woman in Clarke. Where is Barney’s wife, and where is the mother of Joe, who Leonie is taking care of?

This is Throsby’s third novel and, I think, her best. She has a warm, gentle style that is lyrical and engaging. It is obvious that she has a genuine affection for her characters, flaws and all. This book is about more than the mystery of Ginny’s whereabouts and what happens to the people she has left behind. It explores grief, loss and belonging through characters who are struggling to let go of old lives and start over. An engaging read that will have you guessing until the end.