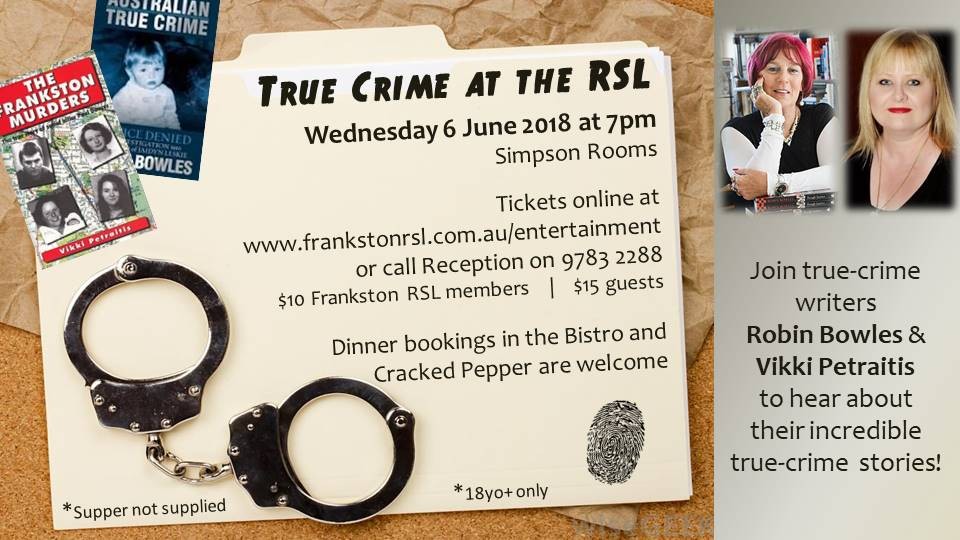 Robin Bowles has been writing crime since 1997, when she read the story of the death of Bonnie Doon housewife, Jennifer Tanner, and decided things didn’t add up. Robin writes about more than crime and investigation, although she is renowned for the forensic detail of her research. She writes about injustice and incompetence, and the pain and loss suffered by the survivors of crime, the living victims. Her fourteenth and latest book – Accidental Death? – is out late May and will be hot off the press at the Frankston RSL.

Robin will be speaking about unjust convictions – when the law gets things horribly wrong.

Vikki Petraitis is celebrating 25 years of writing true crime with her new book, Inside the Law. She tells the stories behind the crime stories and includes cases that have made the biggest impact on her. Vikki is best known for her book on the Frankston serial killer, Paul Denyer. The Frankston Murders is being re-released to commemorate 25 years since the spate of killings shook Frankston.

Vikki will be speaking about her first book, The Phillip Island Murder. After a series of hugely popular podcasts on the 1986 murder of Beth Barnard, interest in the case has once again hit fever pitch.