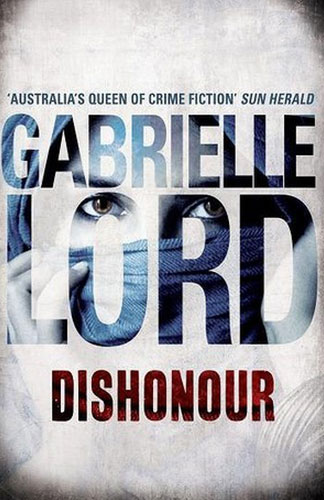 Author: Gabrielle Lord
Publisher: Hachette
Copyright Year: 2014
Review By: Sue Turnbull
Book Synopsis:
Detective-Inspector Debra Hawkins has domestic violence in her sights. But as head of a new police unit targeting violence against women, she has hit a wall of silence. How can she help Rana al-Sheikly, a young woman who yearns for the freedom to lead her own life while her brothers are planning to send her into a forced marriage in Iraq? And what is the connection between these men and the crime gangs that are running rife in the suburbs? A series of anonymous emails has Deb following her personal secrets, too – back to her childhood and the murder of her police sergeant father. Who is digging up the past, threatening Debra’s hard-won career, and even her life?

There are some crime novels which stay with you. One of these is Whipping Boy by Gabrielle Lord, published in 1992 and subsequently adapted into an Australian telemovie starring Sigrid Thornton in 1996. Ahead of its time but hardly ahead of the crimes it portrayed, Whipping Boy pointed the finger at rampant paedophilia networks operating within the upper echelons of the crime and justice system. The book was an excoriating portrait of the collusion of church and state in the exploitation of the young that still resonates today. It’s well worth another look.

Twenty two years, ten crime novels (including two sets of continuing characters), and a highly successful young adult series later, and Lord is hitting the political nerve yet again in a multi layered narrative which takes on the sensitive issue of violence against women in the migrant communities of Southwest Sydney.

While the statistics relating to domestic violence on a global scale may be shocking, Lord’s particular twist is to turn these sobering facts into a crime narrative set in the Australian context and featuring characters about whom we might just come to care.

Our entrée into this political minefield is via the character of Detective Inspector Debra Hawkins who bucks the convention of the unkempt female investigator to favour neat teal and aqua suits accessorised by matching gemstone earrings and high-heeled shoes. Keeping up appearances is a key aspect of Debra’s professional strategy in the male dominated world of cops and crims.

D.I. Hawkins has just been appointed head of a new crime unit dealing with religio-ethnic domestic violence. RED-V is the acronym and their brief to respond to calls for assistance from women of non-English speaking background who are experiencing violence, intimidation and threats of various kinds. As Debra points out to her team, arranged marriages are not a problem if both parties are in agreement. However, once coercion comes into play, it’s a different kettle of fish altogether.

What might count as coercion is played out in a plot featuring the al-Shieky brothers who have recently returned from Iraq and are already implicated in bikie drug deals. On a visit to their house, Debra spots a plaintive young women at the window, Rana, who subsequently makes contact via a friend to ask for assistance in escaping the abusive brothers who are bent on sending her back to the home country and an arranged marriage with a much older man.

There’s a didactic edge to this tale with Lord keen to apprise her reader of the cultural ramifications for women in Rana’s situation. While these sad details are convincing (I suspect there is a sequel in the works given that this story is left unresolved), the plot which really drives Dishonour is the death of Debra’s policeman father and another kind of dishonour altogether.

The book opens in northwest New South Wales in 1992 as Sergeant Peter Hawkins drops the twelve year old Debra off at her dance class and is subsequently murdered after answering a call to a domestic dispute. This is the event which Debra cannot let go, convinced that her father would never have got himself killed in such a situation and that ‘something else’ must have occurred.

What that ‘else’ might have been, I admit to having spotted fairly early on. It therefore became a matter of wondering whether I was right or whether the artful Lord was just playing me along, both of which proved to be true. In this other domestic melodrama, the most vivid and affecting scenes are those featuring Debra and her widowed psychologist mother who is facing a crisis of her own. Their prickly relationship is poignantly delineated as the two women struggle to reconcile with the past and each other.

This is where the strength of Dishonour really lies, in its portrayal of the ties that bind and tear families apart.

Thanks to The Age and the Sydney Morning Herald where this review was first published.