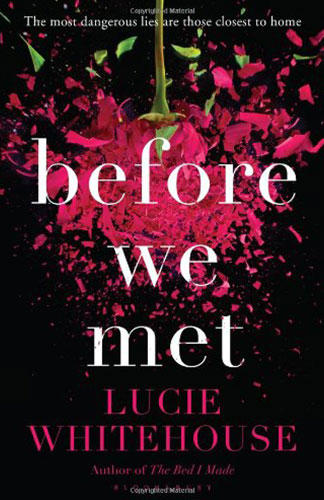 Until the day her husband doesn’t come home …

Hannah, independent, headstrong and determined not to follow in the footsteps of her bitterly divorced mother, has always avoided commitment. But one hot New York summer she meets Mark Reilly, a fellow Brit, and is swept up in a love affair that changes all her ideas about what marriage might mean.

Now, living in their elegant, expensive London townhouse and adored by her fantastically successful husband, she knows she was right to let down her guard.

But when Mark does not return from a business trip to the States and when the hours of waiting for him stretch into days, the foundations of Hannah’s certainty begins to crack. Why do Mark’s colleagues believe he has gone to Paris not America? Why is there no record of him at his hotel? And who is the mysterious woman who has been telephoning him over the last few weeks?

Hannah begins to dig into her husband’s life uncovering revelations that throw into doubt everything she has ever believed about him. As her investigation leads her away from their fairytale romance into a place of violence and fear she must decide whether the secrets Mark has been keeping are designed to protect him, or protect her …

‘The most gripping marriage thriller since Gone Girl’ blurbs the promotional copy for Lucie Waterhouse’s third crime novel, Before We Met. Just to recap, if you haven’t read Gone Girl by Gillian Flynn which was on everyone’s top ten list for 2012, then best do so fast before the David Fincher film version, with a screenplay by Flynn, hits a multiplex near you next October. After which all those surprise reversals may be forever spoiled. Not to mention the fact that Ben Affleck and Rosamund Pike will supplant whatever version of the ‘ideal’ couple you may secretly have cherished.

Back to the blurb. What really intrigued was the proposition that such as thing as the marriage thriller exists, begging the question: So what horizon of expectation does this particular sub-genre of crime set up? Taking Before We Met as the case in point, this seems to be all about the difference between the appearance (an attractive couple and a perfect marriage), and the reality (nothing but).

Hannah Reilly, from whose point of view we follow the proceedings, is an effortlessly beautiful advertising executive responsible for a successful breakfast campaign featuring ‘cereal killers’ – a nice genre pun. Her husband Mark is a handsome powerbroker who started his own business at age 23 and now, nearing 40, has offices in London and New York. Both British, they meet at a friend’s beach house on Long Island before conducting a highflying, inter-continental romance and setting up house in an expensive pocket of South London.

These details are revealed as Hannah drives to Heathrow to meet Mark’s plane from New York; waits in vain in the busy arrival hall, (closely observing the motley travellers); worries through the long night when he doesn’t appear, only to discover that not only is Mark not where he said he would be but that his secretary thinks he’s somewhere else entirely. The seeds of doubt sprout.

Hannah’s incremental suspicion is artfully calibrated as everything she thought she knew about her husband and their togetherness wobbles out of wack, until she is confronted by what is actually at stake and the danger she faces as a result. In the interests of intrigue, I shall desist from further elaboration of a plot which while original in its twists and turns, may be familiar in terms of its strategies and themes.

Like the best kinds of crime, it’s possible to locate the roots of the marriage thriller in earlier literary forms and other kinds of media – not forgetting the ‘ur’ tale of Adam and Eve which cast the wife as the one not to be trusted. As for Bluebeard, while the origins of that particular spousal serial killer may be lost in the mists of time, French fabulist Charles Perrault gave him a good outing in the seventeen century.

The story of the hapless bride who innocently marries an older man only to be disillusioned at best and terrorised at worst has steadily worked its way through nineteenth and twentieth century literature and thence film. Jane Eyrediscovered Rochester’s first wife going not so quietly mad in the attic, while Daphne du Maurier managed to render the first wife, the eponymous Rebecca,even more threatening from the grave. Alfred Hitchock directed the movie version in 1940 and a year later, Suspicion, with Grant playing brilliantly against type as the charmingly sinister husband whose wife (Joan Fontaine) comes to suspect him of murder. Hitchcock was well in on the marriage thriller roll.

And there you have it in all its psychological complexity, a deeply unsettling sub-genre of crime which popping up all over the place at the moment, including Michael Robotham’s last, Watching You. What is so unsettling (and therefore compelling) about these thrillers is the implication, As Before We Met confirms, that the person lying next to you may not be who you think they are. Strange bedfellows indeed.

First seen in The Age and the sydney Morning Herald.