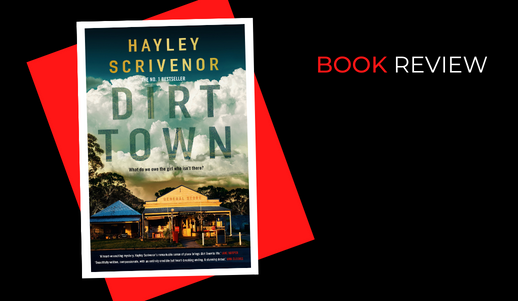 My best friend wore her name, Esther, like a queen wearing her crown at a jaunty angle. We were twelve years old when she went missing.

On a sweltering Friday afternoon in Durton, best friends Ronnie and Esther leave school together. Esther never makes it home.
Ronnie’s going to find her, she has a plan. Lewis will help. Their friend can’t be gone, Ronnie won’t believe it.

Detective Sergeant Sarah Michaels can believe it. She has seen what people are capable of. She knows more than anyone how, in a moment of weakness, a person can be driven to do something they never thought possible.

Lewis can believe it too. But he can’t reveal what he saw that afternoon at the creek without exposing his own secret.
Five days later, Esther’s buried body is discovered.

What do we owe the girl who isn’t there?

Character-rich and propulsive, with a breathtakingly original use of voice and revolving points of view, Dirt Town delves under the surface, where no one can hide. With emotional depth and sensitivity, this stunning debut shows us how much each person matters in a community that is at once falling apart and coming together.
Esther will always be a Dirt Town child, as we are its children, still.

This debut novel had me in its grasp from the start. The intriguing narrator of the first chapter paints a vivid picture of a dusty landscape dotted with trees, fence posts and the recently disturbed soil of a shallow grave. They even tell us who is buried there. But they don’t tell us why or how.

Dirt Town is set in a fictional town around seven hours west of Sydney and focuses on the disappearance of 12-year-old Esther Bianchi.  She was last seen by her best friend, Ronnie, when they walked home from school, parting ways at the church.

Ronnie is one of the five narrators who tell this story. She and the others–a detective and three locals–give a multiple layered view of the town and what lies just beneath the surface.

Because we, the reader, know about the body our focus is on the town, its people and what led to the shallow grave in a dusty paddock.

The multi-layered perspective allows the reader to feel the claustrophobia common to small towns, where everyone knows everyone’s businesses and grudges go back decades. The portrait is so real I had to fight the urge to look over my shoulder, to check no one was leaning over the back fence or peering through their front window wondering who I was as I strolled their town.

Hayley Scrivenor uses this small-town intimacy and endearing, believable characters to drive the story. And it works beautifully. I was captivated by each narrator and as developments in the case occurred desperate to see what each had to say. Including the strange, impossible narrator that Scrivenor has described as the ‘Greek chorus’, a group the somehow speaks with one voice. It was this voice that snuck behind closed doors to tell us what was really happening in this community. They made a local of the reader.

Dirt Town is filled with rumour and tension that leads detectives and the reader down criss‑crossing paths, questioning who is telling the truth, who has a score to settle and who is hiding something. It’s depiction of place is evocative and captivating. This teamed with the characters, the raw emotion and negotiations with grief had me captivated. I highly recommend Dirt Town, a stunning novel from a debut author.