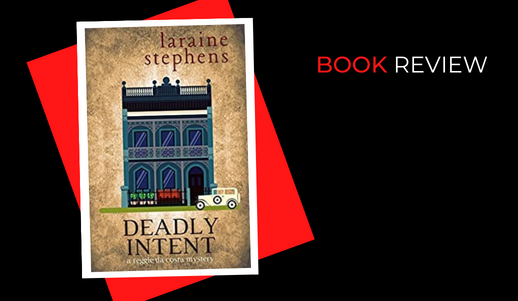 In Deadly Intent, we revisit Reggie de Costa – a crime journalist for The Argus who made his name solving Melbourne’s 1918 Death Mask Murders (Book 1 of the series). Reggie is a not entirely likeable hero – vain, flashy, proud and looking to marry money – but he’s also charismatic, brave, vulnerable, and very good at his job.

The story opens with a victim’s-eye-view prologue: the 1919 murder of Edmund Stout by persons unknown. Soon the tale has moved on to 1923 flooding of the Yarra River. Reggie isn’t best thrilled to be covering suburban natural disasters, but his irritation turns to eagerness when he’s the one to discover a body in a sealed trunk stowed away in a previously locked and abandoned basement.

His natural enthusiasm for investigation combined with the notorious 1923 police strike (and attendant riots) leads Reggie to dive into prodding, probing and charming his way through various suspects, incidents and dangerous antagonists.

At the same time, he gains a colleague in distant family friend, Dotty Wright, after he undertakes some investigative work for her, unravelling the mystery surrounding her recently deceased neighbour.

Schoolteacher Dotty is a little dowdy and eminently sensible, and her level-headedness and integrity make her an excellent foil for the sometimes rash and flamboyant Reggie. Their growing friendship is one of the great pleasures of this book, along with the exploration of 1920s Melbourne, from dance halls and cafes to scruffy suburbs and posh streets.

The prose is sometimes more tell than show, with chunks of character description that might have been better explored through character interaction and dialogue. The last section of the book, when the plot isn’t as done as it seems, isn’t quite as satisfying as the rest, but the whole story moves swiftly along, and made more enjoyable by its contrasting protagonists.

Entertaining from start to finish

Having worked his way up to the position of Senior Crime Reporter for Melbourne’s The Argus, Reggie Da Costa is looking for the next big story. And, perhaps more importantly, the next big fashion, and the fabulous young heiress he needs to support him before he ages beyond appeal.

Much to his disappointment, Reggie is assigned to report on the aftermath of a series of storms which have flooded several areas of inner-city Melbourne. While snooping in the basement of a damaged building, Reggie discovers the remains of a murdered wealthy widower Cornelius Stout. He jumps on the case and quickly realises that there is a string of unsolved murders of wealthy single men. Reggie, with the assistance of sensible school ma’am Dotty Wright (and this is a story in itself), works to uncover the mystery with the occasional help of Melbourne’s underworld and the local constabulary.

Reggie da Costa is a charmingly flawed character. He is the definitive peacock, a dedicated follower of fashion and more than a bit of a ladies’ man. Aside from his journalistic aspirations, his heart’s desire is to win the love and wealth of a young, beautiful, well-connected heiress who will keep him in the lifestyle to which he hopes to become accustomed. We all know and love a Reggie, they usually wind up sleeping on your sofa for weeks at a time when their latest relationship flops.

But it is not just Reggie, all the characters are believable, some likeable and many relatable, be they his long-suffering mother, cad of a father, gruff media and police associates, society belles, or underworld connections. Each offers that special something to Reggie’s life and add colour to the story.

Stephens’ descriptions of 1920s Melbourne transport you to the era. You feel a part of the sights and sounds of inner-city life, imagining every street, scene, and person with great detail.

The plot builds smoothly, with many twists and turns and engaging subplots. You are kept on your toes right up until the end. And it is more than just solving the crime; you need to know if Reggie sorts his family relationships, and which poor girl he draws into his world. The chapters are short grabs, making the book easy to read and hard to put down.

Deadly Intent is the second instalment in the Reggie da Costa series. It reads as a stand-alone novel, but I must admit that if I wasn’t reading this book for the purpose of review, I would have immediately put it down and sourced the first one. This is such wonderful fun and super read for anyone looking for an entertaining escape.

I thoroughly enjoyed this story and loved pretty much everything about it. If you enjoy cosy mysteries like the works of Kerry Greenwood, you will love Deadly Intent by Laraine Stephens.