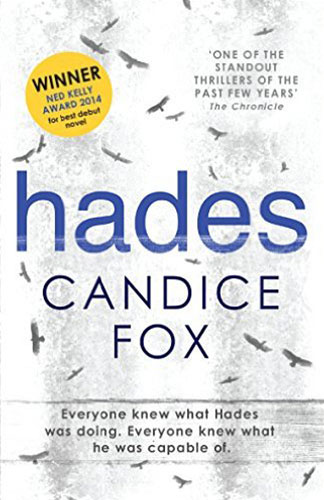 Author: Candice Fox
Publisher: Random House
Copyright Year: 2014
Review By: Anne Bruist
Book Synopsis:
Homicide detective Frank Bennett has an intriguing new partner. Dark, beautiful, coldly efficient, Eden Archer is one of the most enigmatic colleagues Frank has ever worked with—that includes her brother Eric, who’s also on the Sydney Metro police force. All of them are tested to the core when a local man discovers a graveyard of large steel toolboxes lying at the bottom of the harbor. Each box contains a grisly trove of human body parts.

For Frank, the madman’s clues are a tantalizing puzzle. For Eden and Eric, the case holds chilling links to a scarred childhood—and a murderous mentor named Hades. But the true evil goes beyond the bloody handiwork of a serial killer

I’d looked at this a few times and kept feeling it was semi-futuristic or at least quasi-Hunger Games type world (and while I liked the Hunger Games, it isn’t usually my thing) and then put it down again, but when looking at Angela Savage’s & Sue William’s list of short-listings for the Ned Kelly I thought I needed to read a recent winner—as this did in 2014 for best debut novel.

I am glad I did. I know why I had the impression I did and I wasn’t entirely wrong – I guess the book setting is a little inspired perhaps by those types of worlds, but Hades is clearly contemporary, and clearly Sydney, though just where the underworld of Utulla tip is …well wherever you want to imagine it (“on the ragged edges of the Western suburbs”). Fox creates a fabulously rich and believable microcosm—a world we can see and fear and be fascinated by. Hades has ‘adopted’ Eden and her brother and brought them up in this unusual world, with more than its fair share of violence. We get a flashback into the ‘adoption’, then straight into real time told first person by cop, Frank. Eden is his new partner, and there’s plenty of attraction as well as friction. The current story starting with a body is compelling enough—but it was the past (and we get regular flashes back, in sections in italics) and the characters that kept me riveted.

Fox builds tension, entwines stories and has us routing for (or not…) her characters as they crash through at full pace to an exciting climax. A very impressive book – and would be even if it wasn’t a debut.