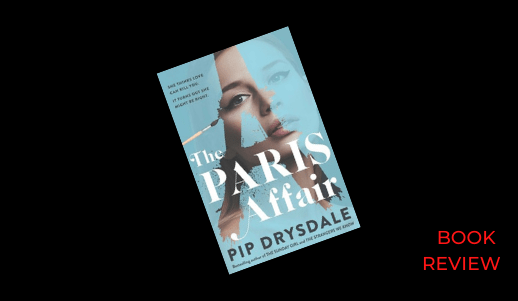 Like its predecessors, Pip Drysdale’s third standalone novel is pitched to a youngish female readership. Jaunty self-confidence is the top note of Englishwoman Harper Brown’s narration of The Paris Affair as her adventures across the Channel begin.

Late-20s Harper has five dating apps on her phone and a commitment to casual hook-ups only. Her bravado slips a little, though, and heart notes can be scented as she confides to her audience of readers that she is still recovering after being dumped by her boyfriend of eight years.

More poignant and humorous moments follow as Harper oscillates between brazenness and vulnerability in a demonstration of astute characterisation by Australia-based Drysdale.

So far so chick lit. Readers drawn in by the book’s cover promise of crime will be hoping the base notes are not too long delayed.

Harper’s employment at an online magazine provides the route to the crime action. Although she is an entry-level arts reporter with scanty knowledge of French, Harper envies the news reporter scoring the tougher assignments. When he plans an article built around the recent discovery of the body of a missing young woman, she learns some chillingly unromantic information about the numbers of women killed in France annually and the numbers of unidentified bodies found each year.

Through her work Harper gets to know gallery owner Agnès, attractive emerging artist Noah X, and Noah’s model, student Sabine. After Sabine goes missing and her body is found, Harper is motivated by both her personal connection and her journalism ambitions to initiate her own investigation.

Had Sabine learned too much about white-collar crime in the art world? Was she the second victim of a serial killer? Or was her killing a one-off related to passion and jealousy?

In her bold fashion, Harper assures her best friend she knows how to take care of herself: “I’m the girl who knows how to get out of a car boot. Good luck to any psycho who tries that shit on.” This is one woman who doesn’t hold back for lack of a helper, male or female.

Harper Brown is an expert at picking locks, breaking her way out of car boots, talking her way out of trouble and she could run a masterclass on escaping relationships – her record for losing a guy is three minutes flat. She’s addicted to true crime podcasts and is the genius behind a micro-column called ‘How to not get murdered’.

After having her heart broken helping her ex follow his dreams, Harper has moved to Paris to fulfill hers. She’s talked her way into a job as an arts journalist, a stepping stone to her dream role as an investigative journalist. All she has to do is whatever it takes to get there. But then one night she meets the artist Noah X, and everything she thinks she knows is turned upside down.

Soon Harper finds herself entangled in a web of lies, hot on the trail of a murderer and the scoop of a lifetime. This is the story that could make her career – if the killer doesn’t catch her first.

Reviewer: Robyn Walton. Review first appeared in The Weekend Australian, April 2021 and is reprinted with permission.