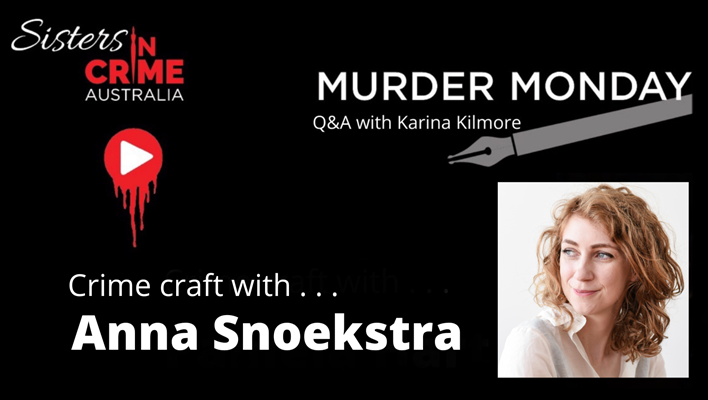 Anna Snoekstra’s books have been published in over 20 countries and 16 languages and her first audio drama, This Isn’t Happening, is out with Audible later this year. Her short stories have won the Australian Shadows Awards, Ditmar Awards, and Aurealis Awards. Anna talked about her career and crime craft with Carmel Shute, Sisters in Crime’s secretary, for July’s Murder Monday. (Carmel is standing in for Murder Monday’s usual interviewer, Karina Kilmore, this month.)

It’s five years since Sisters in Crime has had the pleasure of speaking to Anna. Back then, she was talking about her second psychological thriller, Little Secrets, which followed the huge success of her debut novel, Only Daughter. That’s been followed by three other crime novels, The Spite Game, Mercy Point, and now Out of Breath, just out with HQ.

It obviously shows that studying Creative Writing and Cinema at the University of Melbourne, followed by Screenwriting at RMIT University, can pay off!

Along the way, Anna has dealt with a large number of rejections and managed to keep body and soul together by working as a cheesemonger, waitress, Christmas elf, nanny, receptionist, cinema attendant, and film reviewer.

Murder Monday interviews are available on Sisters in Crime’s YouTube channel at 6pm once a month on a Monday.