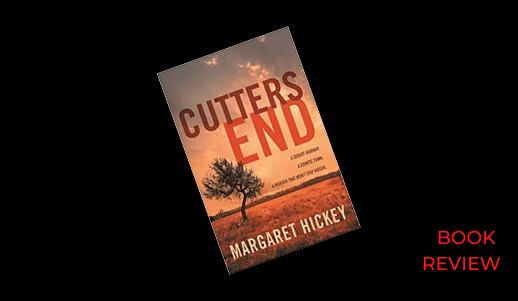 Margaret Hickey’s debut into crime fiction is a gripping read: young women hitchhiking on sparsely populated desert highways, tyre tracks into the bush with none out-bound, the punishing heat of and Australian Summer and small-town gossip alongside dark secrets.

Hickey grew up in country towns throughout Victoria. She holds a PhD in Creative Writing, specialising in depictions of landscape in Australian literature. And the depiction of the landscape in Cutters End ensures landscape is an integral character in the book. Captured is the dust, the searing heat, glimpses of rugged beauty, and stark loneliness of the Australian outback. Woven through the narrative are inhabitants who are often at odds with the landscape: some are jaded, others bored, several transient, and a few at battle with or uneasy with nature. Occasional references to Ivan Milat and Wolf Creek spark a fear that lurks in a reader’s mind throughout the novel.

Cutters End is a tightly plotted mystery: a reopened 1989 cold case into the death of Michael Denby whose corpse was found  just off the Stuart Highway next to his incinerated vehicle. But was his death really an accident? Acting Inspector Snr Mark Ariti is seconded from long service leave to investigate. He teams up with local Senior Constable Jagdeep Kaur (a fabulous character) who has voluntarily transferred Adelaide to remote South Australia to escape demands of her extended family and the stress of organising her upcoming wedding. She’s no-nonsense with an intelligent investigative nose. Her witty exchanges with Sergeant Darryl Wickman (a long-time local copper on the verge of retirement) are a delight. Even the minor characters in Cutters End jump from the page. The novel encapsulates small-town politics, what’s deemed acceptable behaviour and what is excused due to circumstances, and hints at the bruising existence of country living and the high suicide rate. And what of Denby, the acknowledged local hero who saved a mother and daughter from drowning? Ariti and Kaur re-interview possible witnesses into Denby’s death. One witness is Ariti’s old school friend who caught a lift with Denby while hitchhiking to Cutters End.

Hickey drip-feeds information which heightens a sense of intrigue throughout the novel. Is Denby’s death really an accident or something sinister? Cutters End sits well in the outback noir genre and is reminiscent of Jane Harper’s The Dry. Hopefully there’s a sequel to Cutters End in the works.

A desert highway. A remote town. A murder that won’t stay hidden.

New Year’s Eve, 1989. Eighteen-year-old Ingrid Mathers is hitchhiking her way to Alice Springs. Bored, hungover and separated from her friend Joanne, she accepts a lift to the remote town of Cutters End.

July 2021. Detective Sergeant Mark Ariti is seconded to a recently reopened case, one in which he has a personal connection. Three decades ago, a burnt and broken body was discovered in scrub off the Stuart Highway, 300km south of Cutters End. Though ultimately ruled an accidental death, many people – including a high-profile celebrity – are convinced it was murder.

When Mark’s interviews with the witnesses in the old case files go nowhere, he has no choice but to make the long journey up the highway to Cutters End.

And with the help of local Senior Constable Jagdeep Kaur, he soon learns that this death isn’t the only unsolved case that hangs over the town…