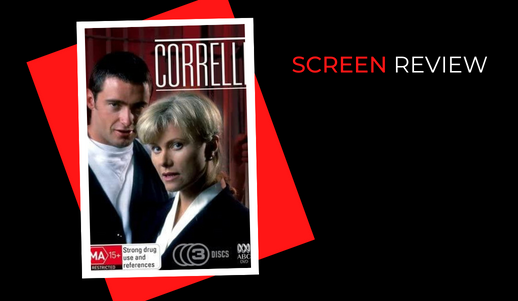 To celebrate its 90th anniversary, the ABC is posting classic TV dramas. One of these is Corelli. It is on a square screen but otherwise is as relevant today as it was in 1995. It is so much more than the set where Deborra-Lee Furness met Hugh Jackman.

The series was created by Denise Roberts and Carol Long. The portrayal of prison life is spot-on. From the first scene, you get a visceral feel for a prison: the noise, the bravado, the underlying menace, and the need for constant vigilance. The psychologists’ offices are squirrelled into the thick prison walls – the only light from high-set windows. Lack of funds frustrates the officials and has dire consequences for the prisoners. Nothing has changed since the nineties except a safe cell now has plumbing.

It begins with a movie-length episode where Louisa Corelli (Furness) begins work as a prison psychologist who is determined to do her job well. She identifies a recent brain injury in a prisoner, Kevin Jones (Jackman), and tries to help him. Sister Pat (Sue Jones) warns her against getting too involved. Corelli’s relationship with Kevin Jones is an ongoing theme.

Each episode also has a stand-alone story. It’s hard to pick which is the most heartbreaking. Your sympathy is with both the prisoners and officers. There is a line-up of terrific actors, many that you’ll not get a chance to see again. The directors include Kate Woods (Looking for Alibrandi). Combine that talent with good plots and smart dialogue and you have a series that keeps you glued to your chair – until it is too much, I took a few agitated tea breaks.

Co-creator and writer, Denise Roberts (you may remember her as the receptionist Julie in GP), doubles down playing a prison officer in two episodes and is totally compelling. I’m a Denise Roberts fan-girl.

Keep an eye out for Ruby Hunter in Episode 7.

Note: Sisters in Crime was thrilled when Deborra-Lee Furness presented its 2nd Scarlet Stiletto Awards in Melbourne in 1995.