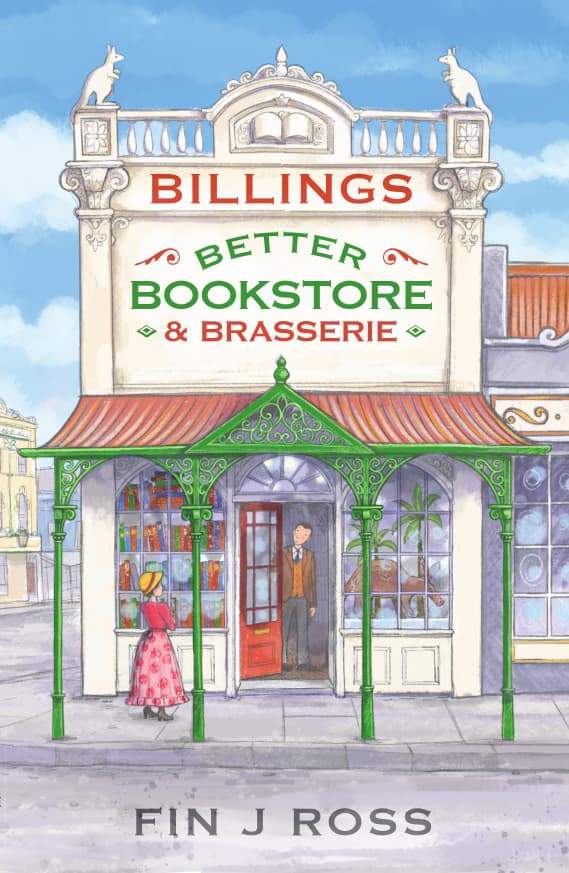 Young Fidelia Knight arrives in Melbourne in 1874, alone except for her treasured companion, Samuel Johnson; well, half of him.

To escape servitude, Fidelia hides each night in the renowned Coles Book Arcade. She loves words, you see, and wants to know them all.

What she overhears in Coles sets her on a path that will change the lives of everyone she meets, starting with Jasper Godwin the hopelessly underqualified manager of the new Billings Better Bookstore.

Fidelia’s thirst for knowledge is contagious. She tutors two orphan boys and two illiterate women, inspiring them to unlock their creativity; and her exploration of colonial Melbourne takes her to some unusual places.

Nothing daunts this diminutive genius, except the mystery of what really happened to her parents on the voyage from England, in Fin J Ross’ Billings Better Bookstore & Brasserie. With illustrations by award-winning author-illustrator, Judith Rossell.

Meet Miss Fidelia Knight.  She set out from England with her parents on the SS Great Britain and arrived in Melbourne in 1874. Alone, except for half of Samuel Johnson.  Fidelia takes refuge at night in the fabulous Coles Book Arcade in Bourke Street. Here, surrounded by books, she takes refuge in words. But Fidelia’s rest in Coles Book Arcade is interrupted by a man puzzling over words (in alphabetical order).

Over twenty-six wonderful chapters, an A to Z of life through words, we travel with Fidelia as she meets several wonderful (mostly) characters and changes their lives. First, she starts with Jasper Godwin. He is the manager of the new Billings Better Bookstore and he is really struggling to prepare for the opening: how can he catch the attention of potential customers?

‘Could she be Quandary Man’s muse? Would he thank her for her effort? Or begrudge her presumptuousness?

Amelia Audacious Admonished an Amateur Abecedarian and Absconded with an Antediluvian Aardvark,

After Adjourning for an Arousing Absinthe at Billings Better Bookstore and Cafeteria.

Did she Absolutely?  She did indeed!’

And this is just the beginning. Fidelia loves words. Her enthusiasm helps Jasper Godwin, and Mr Billings who is also in a position to help others. Where others see problems, Fidelia sees possibilities.  But there is one mystery she would like to solve: what happened to her parents?

What a word feast this novel is! The superb cover and illustrations are by Judith Rossell and they are a perfect complement to the story. I discovered new words, met some old favourites, and loved the alliteration. Fidelia’s thirst for knowledge is unquenchable and her enthusiasm enables her to teach others. There are some unexpected twists in the story, and a very satisfying ending.

Every one of the twenty-six chapters opens alliteratively. My favourite today is x.

To eXtricate himself from a Xanthippe aboard his Xebec,

In an eXotic display at

Did he Xenially?  He did indeed!’

A rewarding read.  A read to return to.  Really.