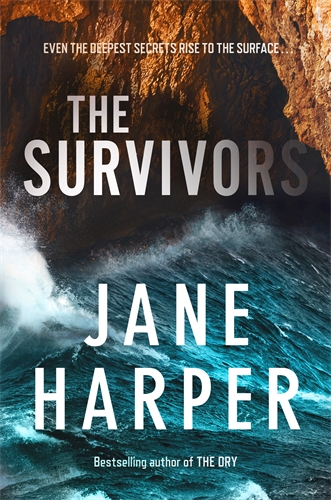 The guilt that still haunts him resurfaces during a visit with his young family to the small coastal community he once called home.

Kieran’s parents are struggling in a town where fortunes are forged by the sea. Between them all is his absent brother, Finn.

When a body is discovered on the beach, long-held secrets threaten to emerge. A sunken wreck, a missing girl, and questions that have never washed away…

Review first published in the Weekend Australian on 22 September 2020 and republished with permission.

Jane Harper’s capacity for evoking natural environments and creating characters and storylines credibly informed by these locations is on display as strongly as ever in her new novel, The Survivors.

Harper’s protagonist, Kieran Elliott, is repeatedly drawn back to a site that remains significant for him: a pair of sea caves at the base of a Tasmanian cliff, their dark mouths open to the ocean. The magnificence and power of the natural elements at this location are well suggested by the Australian edition’s cover.

When the tide comes in, cold water surges into these caves, rising rapidly toward their head-height roofs and inundating their downward sloping tunnels. Suddenly, if a visitor has been inattentive, they are at imminent risk of drowning. And, of course, the likelihood of death is all the greater if bad weather hits.

Twelve years ago, when he was 18, Kieran was in one of these caves with a girlfriend, taking advantage of the privacy of the place, while a severe storm was approaching. The girl, Olivia, escaped to raise the alarm. Kieran survived also, but only just. Three people died nearby. Two were young men, the elder brothers of Kieran and his friend Sean. They were coming to Kieran’s rescue in their catamaran when it capsized. The third was a schoolgirl, Gabby. Last sighted on the beach, she was presumed to have been swept out to sea. Her body was not found.

Harper does not invoke caverns’ archetypal or psychoanalytical resonances or summons Romantic [sic] or Gothic [sic] melodrama when her protagonist revisits. Kieran’s trauma-affected memories and increasing unease inside the cave system are realistically described, and the fact that Kieran brings his infant daughter with him compounds the psychodrama.

The narrative is told almost exclusively from the point of view of now 30-year-old Kieran, with male friendship signalled early on as a theme, and males maturing into kindness and forgiveness an emerging theme.

Having returned to his hometown from Sydney to see his parents, Kieran also expects to catch up with Sean and his other long-time friend, Ash. Kieran’s partner, Mia, is bemused that he can expect to pick up these friendships after a long interval of nothing but sporadic text messages: “Male friendships are so weird”. Kieran is comfortable, however. If his bonds with Sean and Ash were ever going to fail, that would have happened in the days of storm and stress.

When the three men meet up there are jocular insults (Kieran’s baby is “too pretty to be yours, mate”) and mild jibes freighted with resentment, an invitation to a shipwreck diving expedition, and a generous offer to tidy Kieran’s parents’ garden before they market their house to fund Kieran’s dad’s admission to a dementia facility. The proximity of Sean’s belligerent teenage nephew, who blames Kieran for the catamaran deaths, rankles.

Next morning a body is found on the beach. Student and café-hand Bronte has drowned, with bruise marks indicating she was held underwater. With a murder case above the paygrade of the town’s familiar and lenient police, a Detective Inspector arrives from the city. Soon Kieran finds her taking an interest in the caves, apparently suspecting similarities between the Bronte and Gabby cases.

The scenario of an attractive young woman’s death prompting then-and-now investigations in a fictionalised regional town struggling with social change is common in the sub-genre of the psychological mystery or domestic noir. If Harper wears it better, reasons can be found in her pacing and storytelling (the book is worth rereading to savour how clues and misdirections are doled out) and in the detailed, touching realism of her characters’ interactions.

Harper’s unsentimental evocations of how individuals deal differently with loss and shame are noteworthy. She is also alert to how small family units suffer. Collective community reactions are addressed sparingly, however, Harper using as her commentator a journalist-turned-thriller author, G. R. Barlin. He is a poseur in the eyes of Kieran and his peers, but he has a sly wit and Harper has self-referential fun with him while settling the odd score.