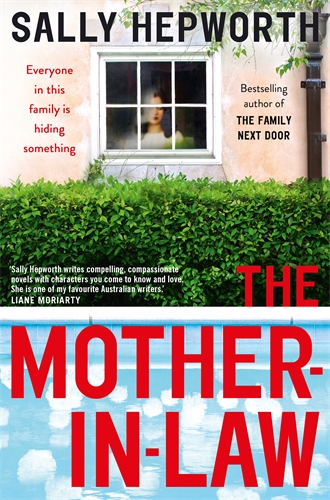 Someone once told me that you have two families in your life – the one you are born into and the one you choose. Yes, you may get to choose your partner, but you don’t choose your mother-in-law. The cackling mercenaries of fate determine it all.

From the moment Lucy met Diana, she was kept at arm’s length. Diana was exquisitely polite, but Lucy knew, even after marrying Oliver, that they’d never have the closeness she’d been hoping for.

But who could fault Diana? She was a pillar of the community, an advocate for social justice, the matriarch of a loving family. Lucy had wanted so much to please her new mother-in-law.

That was ten years ago. Now, Diana has been found dead, leaving a suicide note. But the autopsy reveals evidence of suffocation. And everyone in the family is hiding something…

Plot: This book centres around the Goodwins, matriarch Diana (the mother-in-law of the title) and husband Tom, their two adult children Ollie and Nettie, and their partners Lucy and Patrick. By the end of the first chapter we know Diana is dead; we then go back in time ten years and alternating between past and present, in Lucy and Diana’s voices, we get to know the Goodwins…and just who might want Diana dead. Of course she was rich and there is a will…What is on the surface is not necessarily what is beneath…and there’s enough to keep us wondering.

Characters: This is all about the Goodwins, so the cast of characters is small (though we get to see a bit of Lucy’s background before she was a Goodwin). This probably helps the reader move fairly effortlessly around in time, which the author has us doing quite a lot. Lucy is clearly the main character (we know she’s alive at the end for one thing!) and its easy to identify with her; even if you have a great mother-in-law, chances are you have friends who don’t and there are still tensions around marrying the son and around having children that can cause even the mildest mannered people angst. The strength of this book is we see both points of view—and Hepworth enables us to have empathy for both women.

Research: According to the dedication, the relationship with her own mother-in-law didn’t contribute at all! But Hepworth is adept at capturing normal human relationships and weaving story around them that keeps us turning the page.

My Reaction: I knew Hepworth had got a lot of attention for The Secret of Midwives which I hadn’t read, but did so after this and enjoyed, and then read an early copy of The Good Sister which is out later in the year (tip—this one also has a murder, but with a twist and a great lead character, and is my favourite). Her books are very much in the Liane Moriarty/ Jodi Picoult space; easy enjoyable light reading with characters you can identify with and a world not too far from your own, and moral or ethical issues which give them heart. Though this book (and The Good Sister) are technically crime, they won’t satisfy true crime buffs, but perfect for the time of COVID when you don’t need things to be too grim.