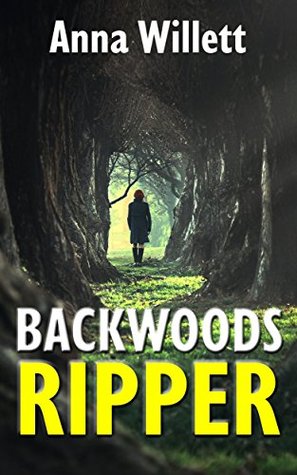 When their car gets a flat tire in the Australian outback, it should be a simple job for capable Hal to fix. His wife pregnant, he sets to it. But an accident befalls him, leaving him immobilized. Paige is now their only hope of getting out of the bush.

When Paige chances upon a stranger, it seems her prayers are answered. But the stranger doesn’t want to help.

Backwoods Ripper is the first novel for Anna. Set in the South West of Western Australia (which coincidentally I have recently visited) a young couple expecting their first child are enjoying some time alone before the baby arrives. In hindsight, they probably should have stayed home.

While stopping to have lunch they have the most unfortunate luck: first they discover one of their tyres has been slashed, Hal gets bitten by a snake while changing it and then the car falls on him. Paige flags down help but is it the help they need? The creepy woman who picks them up lives at Mabel House, once an old Hospital with her adult daughter and does whatever she can to keep Paige and Hal under their roof until the baby is born.  And I mean “anything”.  It is obvious that the Author is a Stephen King fan, as the story smacks of Misery.

I felt beginning of the book would have worked better as a Chapter 3 or 4, allowing the reader to get to know the young couple, their reason for travelling where they were and just setting the scene better. The other confusing matter was the title, “Backwoods Ripper”.  It implies a plot more along the lines of a crazed serial killer. The number of typos in this publication is also a bit off putting.

The characters confused me at time. I found it strange that Paige had no idea how far they were from “civilisation” as she had been awake for the entire trip.

Although there was a certain amount of suspense and I found myself looking forward to the end of the book, there was enough there to make me want to read another book by this Author.