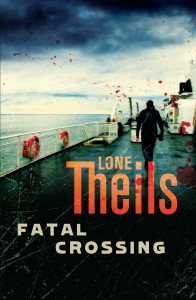 When a picture of two Danish girls who disappeared on a boat bound for England in 1985 emerges many years later in an old suitcase from a British second-hand dealer, the journalist Nora Sand’s professional curiosity is immediately awakened.But before she knows it, she is mixed up in the case of a serial killer who is serving a life sentence in a notorious prison and the quest to discover the truth about the missing girls may be more dangerous that she had ever imagined.

People go missing every day, sometimes by choice, sometimes not. Some leave behind families who never give up the search. Lulu and Lisbeth, residents of a Danish children’s home, are not so lucky.

One day in 1985 they begin the trip of a lifetime, a ferry voyage from Denmark to the UK. They never disembark. Their disappearance makes headlines, causes a few bureaucratic headlines, and is finally abandoned to the annals of salacious mysteries. They are, after all, troubled children in state care. Grief for such children is rationed.

That is, until Danish journalist Nora Sand discovers a photograph of the girls taken after the ferry trip. Chillingly, the photo is among a collection of pictures linked to jailed British serial killer Bill Hix. Sand leaps to the obvious conclusion – that the girls are among Hix’s many victims.

But the photo proves to be taken while Hix is in jail. Is there a copycat killer out there?

In Fatal Crossing, Danish author and journalist Lone Theils tracks Sand’s obsessive attempt to uncover the truth. As with all good thrillers, the clues are hidden in crevices and the red herrings (appropriate for Nordic noir) twist away on false trails. And the threats increase right up to the last compulsive pages.

Fatal Crossing has been described as a blend of Nordic noir and British crime fiction. It is this; and it is more. The theme of serial sexual crimes against women has become a staple of English-language crime fiction. This raises important questions about the representation of women as victims and the point at which crime fiction moves between social commentary and voyeurism.

In Fatal Crossing, Theils navigates this tension with a deft social eye and an accomplished narrative. She explores the disturbing link between violence and neglect. She questions a social system that abandons children to the petty bullying and violent crimes of others and, in so doing, asks what happens to such children. She also describes how the lives of good people falsely accused can be ruined forever.

Theils’ success is teaming these bigger questions with a page-turning story. She brings a journalist’s eye to the tale – the detail is precise, the social context across two nations is crisp.

She also brings a writer’s eye. The Danish children’s home is as bleak as the British holiday village of Brine is bright with ice-cream and trinkets. Pete, Nora Sand’s Australian photographer mate, is a warm bloke with a love of whisky. And Nora Sand, the journalist with a penchant for kickboxing and defying her editor, is a character worth getting to know. Let’s hope we meet Sand again.