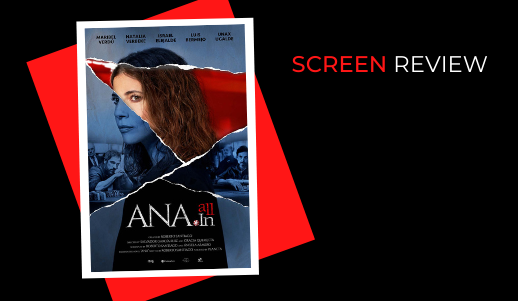 Ana. All In. is well named – Ana Tramel, played by Maribel Verdu, gambles everything in this series of six one-hour episodes, streaming on SBS On Demand.

The story is based on a best-selling novel by Roberto Santiago. He adapted it for TV with Angela Armero.

This is a legal drama with brutal violence. It starts as a murder, but that quickly fades into the background. The murder is committed by Alejandro Tramel, Ana’s estranged brother, who is a gambling addict. Ana is a lawyer who has stopped practicing in court, and so she should, she is a mess with addictions to alcohol and pills. Her brother’s death in prison takes her back to court to sue the casino for causing his suicide.

Ana’s relationships are complex. She is in a legal practice with her best friend, Concha (Natalia Verbeke), who is going through a divorce. Concha has to contend with domestic violence, a custody battle and the freezing of the firm’s funds, as well as Ana’s bad behaviour – challenging to any friendship.

The twists and turns in the plot keep you guessing. You don’t know who to trust but you do know not to trust Ana’s judgement. Wearing my lawyer’s hat, I thought Ana was out of control, self-destructive, ignored conflicts of interest, and should have been struck off for numerous transgressions. That, of course, added tension to the drama. And it is a drama; our heroine Ana puts her body on the line and suffers for it.

The series shines a light on Spain’s addiction to gambling. There are parallels with Australian state governments’ encouragement of casinos operators and then their failure to regulate them. I am in no way implying that the Star or Crown managements arrange for witnesses to be killed, but the current inquiries have shown their disregard for the law.

Legally, I found this absolutely fascinating. The series is made for the Spanish audience, who know their own system, so explanations are not given. The case was heard by a presiding judge with two other judges and a jury of nine citizens. The judge gives the jury a list of 38 questions with a tick-a-box to reach their verdict. I’ve been to a jury conference where a similar system was discussed. It was not adopted here and I got the impression this was not the usual procedure in Spain. I’m dying to find out more.

The practice of having the state’s lawyers and the victim’s legal representatives (Ana’s team) sitting together in court is similar to our coronial system, but in Australia we do not bring a civil and criminal case together. In the series, the advocates wore robes but no wigs. Ana wore her robe over worn jeans and runners. I remember when I first started practicing a judge wouldn’t recognise a woman wearing trousers or open-toed shoes. Since then, the Australian dress code has relaxed a bit but not to Ana’s standard.

You don’t have to be a legal nerd to be sucked into the vortex of this series. I was furious with Ana. Her behaviour was almost too much. Her injuries were not pretty. And I was on the edge of the seat. No spoilers, but the ending is terrific.