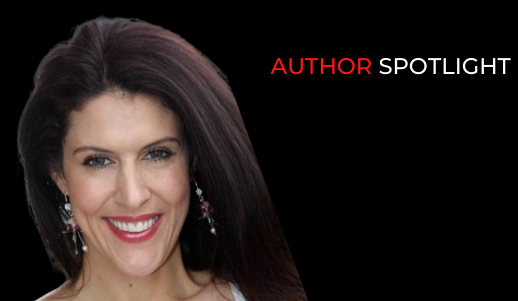 A billionairess is not your typical sleuth. Sydney author, Kellie McCourt, talked to Georgie Baron-Ross about the fun she had writing her debut novel, Heiress on Fire (HQ Fiction).

What drew you to Indigo to tell her dramatic and funny story?

So many things! After a tumultuous, and public childhood, Indigo tries hard to create a quiet, uneventful, adult life for herself, but no matter what she does, or how hard she tries, disaster and mayhem seem to be her fate. I relate!

For example, she very deliberately marries a ‘bran muffin’ (not pretty, delicious or exciting, but reliable, wholesome and good for you), but it turns out he’s more fibber than fibre. That’s a fascinating story. What was he up to? How does she find out? What chaos has he left behind? How will she, with zero practical skills, cope, especially when accused of murdering him?

It’s also intriguing that Indigo truly believes she’s elegant, reserved, cautious, and flying under the radar, when clearly, she’s too trusting, rather accident-prone, imprudently curious, and being the billionairess offspring of the world’s most famed supermodel and a dead ‘playboy’, was always going to be the object of public fascination. It’s not just that Indigo isn’t what you’d expect, Indigo isn’t what Indigo expects!

Pairing her with Esmerelda, a surf-talking, ripped-jeans-wearing, Asian-Australian parolee, makes watching Indigo stumble through the mystery even more hilarious. And while Indigo is pathologically worried about what people think, Esmerelda is incapable of considering it.

For me, Indigo is Batman in Chanel. Like Batman, her superpower is that she’s ridiculously rich. However, unlike Batman, she doesn’t go looking for crime to fight, rather crime comes looking to pick a fight with her.

Through Indigo, we get to see the upper-class lives of Indigo, her mother, and grandmother. Have you had personal experience in/with the glitterati of Sydney?

Of Sydney, where I now live, single mum, two kids, two dogs, and a bottomless washing basket? No. Of my hometown, Perth, back in the day? Definitely.

I grew up in suburbia, but at uni I landed a job working as the gatekeep of The Door of the Members’ Only Room in Perth’s most exclusive nightclub. Over the years I met moguls, socialites, celebrities, heirs, and even criminals. Sure a few were brats, but the majority were polite and others quite wonderful. I made several good friends and had a wonderfully misspent youth socialising, and frequenting charity events, balls, parties, and dinners. After graduation, I worked as a fashion editor, which was pretty glittery too.

I should add, that in my experience, the glitterati doesn’t look or feel any better the morning after a big night out than the rest of us. So, there’s some justice!

The story delves into the career of Indigo’s husband, a ‘conscientious’ reconstructive surgeon. Did you do a lot of research into the plastic surgery requirements (or non-requirements) to practise in Australia? Did you uncover scary truths through your research?

Yes, and yes! We nerds LOVE research, and everything in Heiress on Fire about the surgical medical qualifications (or lack of) required by a doctor to perform cosmetic surgeries is true.

We’re so guided by titles and the things we assume about those holding them, that we don’t ask questions. To be fair, you’d think someone with ‘Bachelor of Surgery’ in their title would be surgically trained!

Heiress on Fire was selected to be part of the Adaptable program run by the Queensland Writers’ Centre. Adaptable aims to bring Aussie books to the screen. As a part of the program, I’ve been invited to the Gold Coast Film Festival in April to pitch Heiress on Fire as a feature film or TV show to a group of film and TV producers. I’m currently working on the pitch docs. So that’s completely terrifying. And exciting. Terrifyingly exciting.

Now that things are slightly less scary (touch wood), I’ve been trying to visit bookstores and retailers to talk about Indigo, Esmerelda, and the second book, Murder Most Fancy. I’m also writing the next book in the Indigo series, and this!

Did I mention the kids and the dogs? Even when I’m sleeping, I dream of sleeping!

‘If attitudes toward female subjugation are systemic, and I believe that they are, it stands to reason that the art we consume and sanction plays some part in reinforcing those same attitudes,’ Molly Ringwald, The New Yorker, April 6, 2018.

So, there’s no sexual violence towards women or children in Heiress on Fire, or any of my other books, specifically because I do not wish to produce, sanction, reinforce or commodify it. But there are lots of brilliant women, some crazy capers, and many, many laughs. Seems like a good trade.

Read Sisters in Crime’s review of Heiress on Fire here.