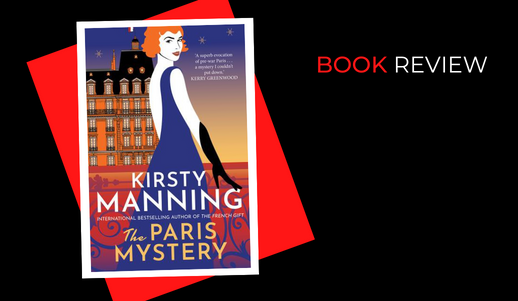 As Australian journalist Charlotte ‘Charlie’ James alights at the Gare du Nord, ready to start her role as correspondent for The Times, Paris is in turmoil as talk of war becomes increasingly strident.

Charlie is chasing her first big scoop, needing to prove to her boss that she can do this job as well as, if not better than, her male counterparts. And the best way to forge the necessary contacts quickly is to make the well-connected expats, Lord and Lady Ashworth, her business. Lady Eleanor knows everyone who counts and at her annual sumptuously extravagant party, Charlie will meet them all.

On the summer solstice eve, the party is in full swing with the cream of Parisian society entranced by burlesque dancers, tightrope walkers, a jazz band and fireworks lighting the night skies. But as Charlie is drawn into the magical world of parties, couture houses and bohemian wine bars, secrets start to unravel, including her own. Putting a foot wrong could spell death …

In this magnificent new beginning to the joyful Charlie James series, Manning beguiles with glamour and mystery set in pre-war Paris.

Kirsty Manning has published several historical fiction novels, all well researched and all containing a generous dose of mystery. I’ve read a few of Manning’s novels, my favourite The Jade Lily is set in post WW2 Shanghai.

When Manning spoke at a recent Sisters in Crime event, she revealed her latest novel The Paris Mystery was written during the nightmare of the Covid, and she wanted to escape the burden of lockdown by writing something lighter than previous novels – a murder mystery! And in Paris!

The Paris Mystery is set during La Belle Époch when France was arguably at its cultural and artistic peak but with WW2 looming. And what’s not to love about Paris during that era. Manning has captured both the sumptuous beauty and decadence of the privileged classes (seen through the eyes of Australian Charlie (Charlotte) James, newly recruited Paris correspondent for London newspaper The Times). Manning confirmed the character of Charlie James was based on past notable Australian female journalists.

The descriptions are pure joie de vivre and perfectly capture the magnificence of Paris: the parties, champagne and food, and the extraordinary couture (all historically accurate). But the beautifully woven detail does not overwhelm the plot which is filled with plenty of red herrings and misdirection, and all that one expects of a murder mystery.

When Charlie’s new acquaintance, Milly, disrupts Lady Ashworth’s circus ball, appearing with a bloodied knife in hand and the dead body of a particularly odious investment banker in the garden, Charlie has the story of a lifetime. As Charlie seeks to find the murder, she discovers her new friends have motives to murder and a few harbour secrets they fear will be exposed. She teams up with Inspecteur Bernard over lunch (how very Parisian), and I sense a love interest on the sizzle. The Paris Mystery isn’t just light reading, it is built on solid bones: jealousy, betrayal, sex, drugs, and murder.

The Paris Mystery is an entertaining romp through the City of Lights. I enjoyed the pure escapism and after finishing the novel was tempted to plan a return to my favourite city. For those who love mysteries in the style of Agatha Christie but with a historical twist, The Parish Mystery is for you.