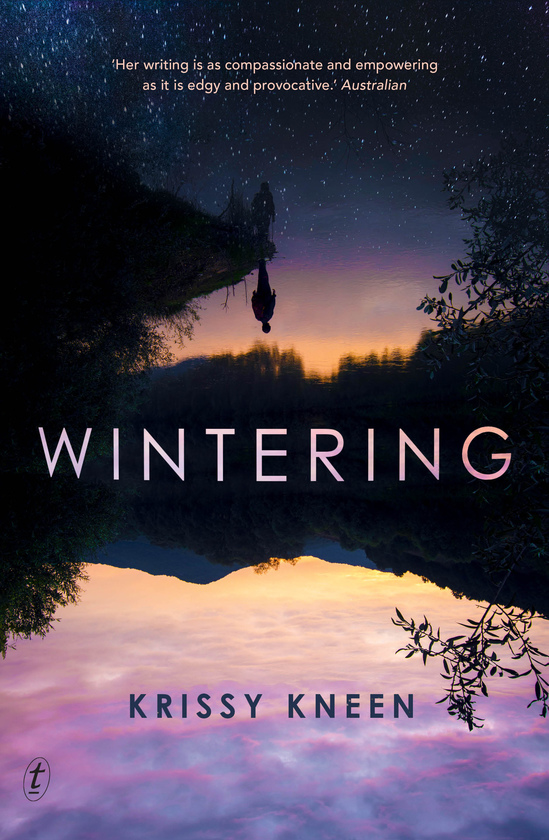 When Jessica’s partner disappears into the dark Tasmanian forest, there is of course the mystery of what happened to him—the deserted car, the enigmatic final image recorded on his phone. There is the strange circle of local women, widows of disappeared men, with their edgy fellowship and unhinged theories. And the forest itself: looming hugely over this tiny settlement on the remote tip of the island.

But for Jessica there is also the tight community in which she is still a stranger and Matthew was not. What secrets do they know about her own life,  that she doesn’t. And why do they believe things that should not—cannot—be true. For her own sanity, Jessica needs to know two things. Who was Matthew? And who—or what—has he become?

Wintering, Krissy Kneen’s seventh novel, belongs to the tradition of Tasmanian Gothic, following Julia Leigh’s The Hunter, first published in 1999. The Tasmanian tiger is a constant presence throughout Kneen’s book. Speculation about whether or not it is extinct, ambiguous sightings and photographic images lead, as the narrative progresses, to haunting and terrifying figures which might or might not be real.

‘An imaginary creature, dead but not forgotten, a phantom. She moved the footage forward a little and the creature reared up.’

An eviscerated possum in an isolated cave on the remote southern coast is the first of a series of mysterious deaths that Kneen’s protagonist, Jessica Weir, finds it hard to explain. A growing sense of menace is explicitly linked to the human inhabitants of a tiny community, with a reference to the 1970s American film Deliverance, and to the sometimes covert, sometimes open hostility with which the locals treat Jessica, who is a scientist, writing a PhD about glow-worms and working part-time as a tourist guide.

A much more powerful sense of threat is that posed by the landscape itself. The density, in many places the impenetrability of the forest, and the ancient fears associated with this, mark Wintering as a story of the frontier, a story where human emotions and the capacity for endurance are tested to the utmost.

The central mystery begins when Jessica’s partner, Matthew, disappears at night on an isolated road, leaving his car with blood on the fender and an enigmatic video on his phone.

It is winter and the likelihood of anyone staying alive in the bush even for a few nights is remote. Almost immediately it is assumed that Matthew is dead, and that his body won’t be found. The bush is just too thick. Kneen describes Jessica’s days and nights of grief, first of all in ways that take recognisable forms, including visits from Matthew’s family and her neighbours, whom Jessica has never got to know. She has lived alone with Matthew and is ignorant, not only about who her neighbours are, but about Matthew’s dealings with them and what they really thought of him.

Then the novel changes and becomes a full-blown horror story, with the reader no longer able to confidently separate ordinary, everyday occurrences and the stuff of nightmares. Jessica finds herself surrounded by a group of widows whose husbands have also disappeared.

The final sections of Kneen’s story are open to varied, even contradictory interpretations. On one level, the widows, whom Jessica is simultaneously drawn to and repelled by, commit acts of vengeance and aggression; on another they are, as they claim, acting in self-defence.

Wintering is a disturbing work, not least because it poses questions which the narrative does not resolve. Though Jessica survives her ordeals, there is no moral or aesthetic resolution which balances, or makes sense of what has gone before. Kneen’s prose is often beautiful and just as often frightening; it’s a compelling mix.