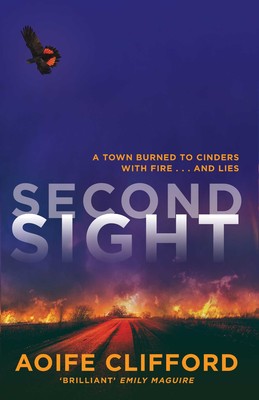 Eliza Carmody returns home to the country to work on the biggest legal case of her career. The only problem is this time she’s on the ‘wrong side’ – defending a large corporation against a bushfire class action by her hometown of Kinsale.

On her first day back Eliza witnesses an old friend, Luke Tyrell, commit an act of lethal violence. As the police investigate that crime and hunt for Luke, they uncover bones at The Castle, a historic homestead in the district. Eliza is convinced that they belong to someone from her past.
As Eliza becomes more and more entangled in the investigation, she is pulled back into her memories of youthful friendships and begins to question everyone she knows … and everything she once thought was true.

Friendships between women shine through Second Sight, lifting what would otherwise be a bleak tale of seemingly bottomless greed.

Second Sight is Clifford’s second novel, following All These Perfect Strangers. Clifford’s protagonist Eliza Carmody witnesses a violent attack in Kinsale, the country town where she was born, an attack that reverberates throughout the rest of the novel. Immediately afterwards, Eliza turns up at the home of her old school friend Amy Liu. Amy is a local doctor, heavily pregnant, and it is her stability and kindness that first of all gives Eliza a refuge, then supports her through one trial after another.

Eliza is partner in a city law firm and is in Kinsale to speak to an expert witness about a fire that may or may not have been deliberately lit. The fire ruined the lives of many people in and around the town. Eliza is representing an electricity company that faces a class action spear-headed by a woman who hopes to be Kinsale’s next mayor.

While the fire and its ramifications are much more than background to the novel, they are overtaken at times by the hunt for Luke Tyrell, responsible for the violent street attack, and by the way this manhunt draws Eliza back into events that took place when she was a teenager.

‘My father used to drum the words “every contact leaves a trace” into all the junior cops he trained. Mostly he meant don’t screw up a crime scene, but it could be taken as a philosophical statement. With the exception of Amy, I thought I’d put everything in Kinsale behind me twenty years ago.’

A third girl, Grace, once friends with Amy and Eliza, disappeared on New Years Eve 1996 and has never been seen or heard from again.

Spliced into the story are sequences, told from different points of view, about what happened on that New Years Eve.

Clifford skilfully weaves together the plot’s different threads, as events from the time when the girls were adolescents shed light on the runaway Tyrell, another young man who was once his friend, and the historic homestead this young man’s family hopes to sell to developers.

It’s necessary for the reader to keep quite a large cast of characters in mind at the same time. Eliza’s sister has a role to play, as does their father, once a respected policeman in Kinsale, now brain damaged as the result of an accident. Other police officers are important for the story, as is the man Tyrell injures, and a frightening individual who keeps birds.

Eliza’s professional and personal life are under threat almost continuously as the tension builds. The title Second Sight suggests that Eliza is given opportunities to retrieve the past, if not fully and completely, then enough to make some reparation for mistakes – the recent past as well as the youth she shared with Grace and Amy.