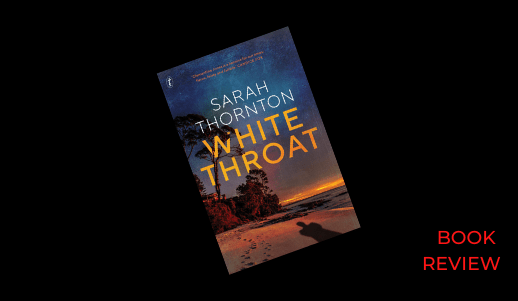 Disgraced former lawyer Clementine Jones is on the shores of paradise—Queensland’s Great Sandy Straits—trying to outrun her past.

Clementine (Clem) Jones, the creation of Queensland-based author Sarah Thornton, is a former corporate attorney left remorseful and unemployed following an error of judgement that saw her gaoled.

In Lapse (2019), Thornton’s debut novel, Clem’s leadership and problem-solving skills were reactivated as she took on the job of football coach in the Victorian struggle-town to which she’d retreated. While guiding her ragtag team to a premiership win, Clem also probed some murky local crime.

Lapse was a dogged little book that called out for a sequel. Now we have it in White Throat, set a few months later in the footy off-season. Clem has shifted north to a Queensland fishing village, where she has a gig as a shanty sitter and dog minder while she contemplates whether she is ready to accept a sports law job offer in Sydney.

There’s no holiday from crime and danger, however, even in this backwater. Why else has Thornton made the dog a 55kg bull mastiff?

Another signal of drama to come is the phone call from one of Clem’s players, Matthew Torrens, a former standover man who’s built like a heavyweight boxer and has his own reasons for needing to lie low for a while. When Torrens asks “You need some muscle up there?”, the question is prescient.

Readers of Australian rural and coastal-set fiction of recent decades will recognise the elements of Thornton’s criminal plot: real estate, financial scams, and mining and infrastructure development versus environmental conservation.

Citing her corporate governance expertise, Clem seizes the presidency of the local wildlife association after its leader, a friend of hers, is found dead, probably murdered although the police say suicide. She then exploits this base, robustly disregarding inconvenient rules and laws as she investigates the killing.

Thornton’s reproductions of a diversity of voices and language usages, from the vernacular to the bureaucratic, allow us to believe in Clem’s capacity to relate across the social spectrum.

Her presentation of differing viewpoints is also noteworthy. She does not allow her intelligent, curious protagonist to be one-eyed, and she does not dumb down the public interest issues that coexist with her story’s audacious action sequences and broad humour.

Torrens shapes up as needed. A knockabout bloke, he is loyal, admiring, affectionate, and a more effective ally in Clem’s circumstances than any suit from her former life.

Reviewer: Robyn Walton. The review first appeared in The Weekend Australian, April 2021 and is reproduced with permission.

Disgraced former lawyer Clementine Jones is on the shores of paradise—Queensland’s Great Sandy Straits—trying to outrun her past.

Bored with her house-sitting gig, she becomes a reluctant recruit to the local environmental group, campaigning to save an endangered turtle as developers close in. Then a body is found at the base of a quarry, and Clem’s world is turned upside down.

The police say suicide. Clem’s convinced it was murder. She also knows she’s the only one interested in tracking down the killer.

Well, the only one apart from her friend Torrens, ex-con and reformed standover man. And he’s got his own fight on his hands.