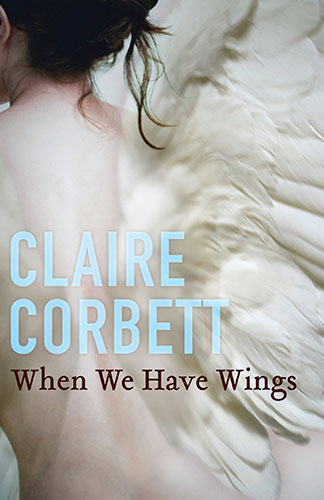 Author: Claire Corbett
Publisher: Allen and Unwin
Copyright Year: 2011
ISBN: 978-1-74237-556-4
No of Pages: 420
Price: $32.99
Review By: Sue Nankervis
Book Synopsis:
The dream of being able to fly is now a physical reality, but only the rich and powerful can afford the surgery, drugs and gene manipulation to become fliers. Peri, a poor girl from the regions, will sacrifice anything to get her wings and join this elite, but the price is higher than she could have imagined. So why then does she throw it all away?

Despite the dead body found on the first page, and one of the narrators being a hard-bitten PI, ‘When we have wings’ is not your classic crime novel. It could have many labels: speculative fiction, urban fantasy, futuristic thriller, but I suggest you put the labels aside, and just go along for the ride.
The story is told in alternate chapters from the points of view of the frightened teenager, Peri, who finds the body, grabs the baby and runs (well, flies, actually); and Zeke, the PI hired by Peri’s employer to track her down and retrieve the baby. Both are very engaging characters. Peri’s initial terror-fuelled flight seems a bit ditsy, but she’s a girl with a lot of growing up to do, and who faces down a series of physical and emotional challenges with great resilience. She’s a different person by the end of the book, and it was very satisfying to be part of that journey with her. Zeke, too, initially seems to be cut from PI cliché cardboard, but very rapidly becomes established as a good man in a hard place, as issues in the case he is investigating, and his own family, overlap.
Corbett has created a future world that is horrifying to contemplate, but also exciting and challenging to experience. The details of the world and how it has changed from the present day are lightly sketched in, but what she does describe in detail is the development of human flight and the price that is being paid by individuals and society.
Who doesn’t want to be able to fly? The long-held dream has now become a reality for a favoured few. This is still a relatively new phenomenon, and society is still trying to work out the rules. Of course the big drug company is making rules to suit themselves, human rights are being abused, people are killed, there is corruption in high places, deep divisions between fliers and non-fliers are being entrenched. But in a world of bad guys, there are still good guys. People risk their jobs to pass on information, a rebel group of fliers uses guerrilla tactics to access data, and overworked and underfunded police are still able to bring people to account.
While unravelling Peri’s background to track her down, and in particular find out how a poor girl became a flier, Zeke is faced with a nightmare decision. His ex-wife wants their adored three year old son to undergo the gene manipultion and surgery to become a flier. Everything that Zeke has found out about the fliers makes him loathe them, but he also understands that this is a society in flux, and he needs to give his son the best chance for the future. Corbett’s handling of this and other parenting issues in the book is poignant and assured. The reader shares the agony of decisions that have to be made.
‘When we have wings’ is a fascinating book. It took 10 years to write, and is Corbett’s first book. This shows when it is occasionally gauche, particularly when expositing background story; some could argue the descriptions of flight are too long and technical; there is a mish-mash of sub-themes; and Hugo is the most unnaturally well-behaved baby ever. However, the pace is fast, the story exciting, and I just found it really interesting. The descriptions of flight are beautifully lyrical, and I learned a lot about the physics and psychology of flying. I liked that every chapter raised another meaty issue to think about, from climate change, superweeds eating farmland, gene manipulation creating a different species, to working parents and child care, drug abuse, ‘othering’ of those who are different, wealth disparity, abuse of power and so on. It’s a complex world, and like in all worlds, past, present, or future, things are rarely black and white. One of my criteria for a good book is whether I’m still pondering it days after finishing it, and that is certainly the case here. Highly recommended.