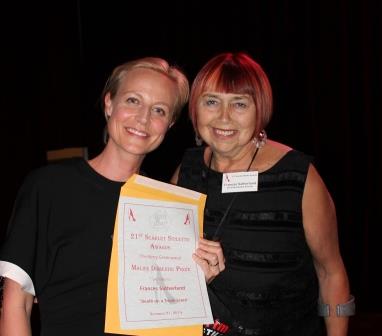 Frances Sutherland, winner of the  Kerry Greenwood Malice Domestic Award in the 2014 Scarlet Stiletto Awards for her story Murder On A Triple Score, has died. (Frances is pictured with Marta Dusseldorp (r).)

Sutherland, who lived in Surrey Hills in Melbourne, was a psychologist who worked in disability and aged care services. She succumbed to multiple myeloma at home on July 26, aged 69.

A colourful figure, she was unconventional and gregarious, with numerous friends from her work, studies and left-wing activism.

Frances’ winning story was about the deadly hostilities which break out between players in a country town Scrabble group. Who will live? Who will die? She described it as a “a grotesque mystery”.

In 2013, her poetry group published an anthology, The Cat and The Philosopher Went for a Walk.

Always great company, she remained upbeat to the end. In the week that she died, she remarked: “Don’t worry. I’m not!“

A more comprehensive obituary was published in The Age.